The main peculiarity of this port city is quite disturbing: the old town is located inside the remains of a palace that once belonged to one of the last Roman emperors.

After your arrival (train, boat, plane, car or bus!), it is naturally with this palace that you will begin the visit.

A city housed in a palace 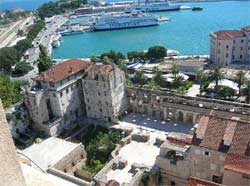 For the record, it was the inhabitants of Salona, ​​a city once a rival of Split, who, driven out by the barbarians in 600, took refuge in the remains of this palace that had belonged to Diocletian, who had built it to take on a sort of early retirement, after his abdication in 305.

So it was an ancient squat which then turned into a medieval town! Nearly 3000 inhabitants still live there today.

The palace includes several important monuments to see: the peristyle, the mausoleum, the vestibule, the temple, the sphinxes,…

Let yourself be guided, many useful information will be given to you during your visit.

Count about ten Kuna (€1,50) each time to visit these monuments.

Do not forget to climb to the top of the bell tower of the mausoleum, it will undoubtedly give you some chills!

A good pizza is also brought to you for cheap on one of the many sunny terraces seen at the bends of the alleys.

Outside the palace: old town and museums 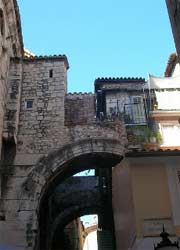 It looks like the houses inside the palace have overflowed outside the walls!

This gives a labyrinth that is cosmopolitan to say the least: judge by the pictures reported!

To see: the town hall, the Marmontova pedestrian street, the Ciprian palace. Some interesting museums are also worth a stop: in bulk: the Maestrovic Gallery, the Ethnographic Museum, the Maritime Museum. 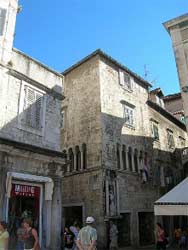 Do not hesitate to stroll through the alleys if a little shopping also appeals to you.


In the evening, the city is very lively, and in general the population is young.

A few mega-dancing style complexes for aficionados are accessible a little south of the city, along the beach.

The island of Brac is also very lively at night.

If you really want to get away from the city, some walks are offered in the surrounding hills, but beware the surrounding beaches are certainly not the best on the coast!

Our suggested activity: Cruise to Elafiti and Green Islands

Cruise to Elafiti and Green Islands from Dubrovnik