An incredible hawk-shaped airport in Turkmenistan 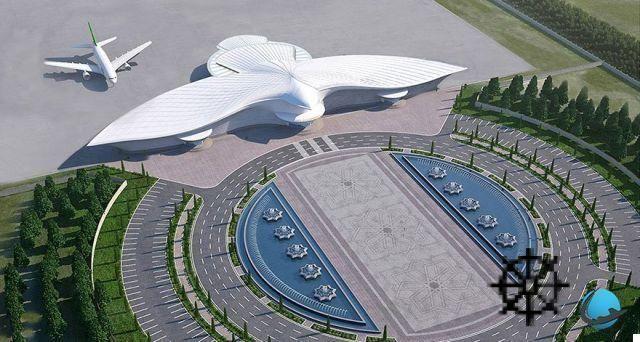 Turkmenistan: the falcon worth 2,3 billion

In Turkmenistan, it is the budget of the new airport that is scary. The state has effectively invested $ 2,3 billion in a futuristic airport with the look of a flying hawk.

The airport can accommodate 1600 passengers per hour. Rather surprising for Ashgabat, the capital where the airport is located, which actually only hosts 12 during this time. This very optimistic project is therefore also very controversial in the country. Many people question the usefulness of this 150 square meter building.


Turkmenistan, a country deserted by tourists?

An airport in the shape of a giant raptor is good, but it won't necessarily bring more people to this country of dictatorship, corruption and media control.

Seulement 105 tourists venture to Turkmenistan each year. This Asian country is rather isolated, it is difficult to obtain a visa to go there and the place is rather synonymous with a giant reserve of natural gas.

It's not just the Hawk Airport in Ashgabat. The city also has an original building in the shape of an open book giant housing a publishing house, and a giant statue of 21 meters, covered with gold leaf, representing President Gourbangouly Berdymoukhamedov.

Who designed this hawk?

add a comment of An incredible hawk-shaped airport in Turkmenistan