Discover the fabulous landscapes of Lapland in winter, and its northern lights 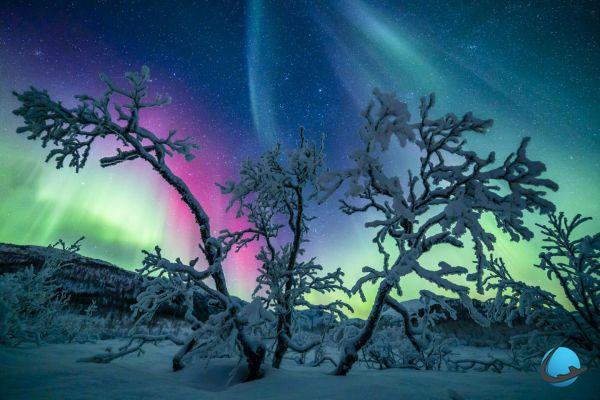 Lapland, land of myths and legends, is the northernmost region in Europe. It is spread over 4 countries: Russia, Finland, Sweden and Norway. But let's focus on the last three Scandinavian countries. In this article, we explain why to visit this region (and especially in winter), what to see and where to go.

Let's start this trip with Finland, land of a thousand lakes, it is also the one who enjoys largest forests in Europe, part of which is also called the “boreal forest”. In winter, it is its hills covered with snow-covered trees and its frozen peat bogs that give it all its magic. Winter is so harsh there that during long months, when the sun no longer crosses the horizon (also called polar night), nature goes to sleep. 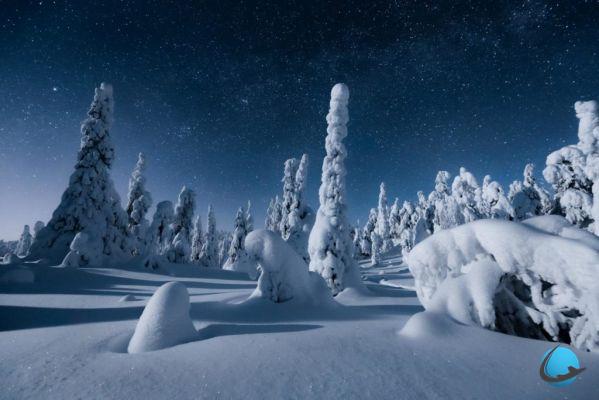 Finnish forest under the snow 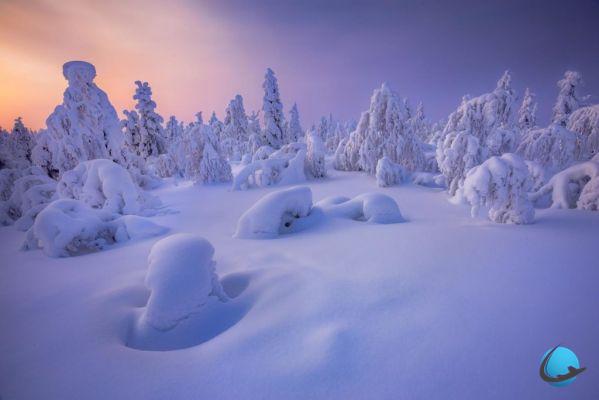 The few hills that dot the Finnish landscape are called "Tunturi". On some of them not exceeding a certain altitude (around 500m depending on the latitude), vegetation remains. When winter comes, the cold is so biting that the trees come to be covered with a thick layer of ice and snow, revealing only their silhouettes in a magical setting. 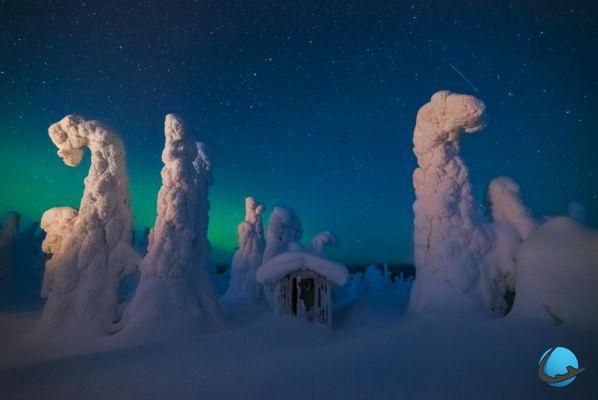 Many places to light campfires with or without wooden shelters are located all over the territory and are an integral part of Finnish culture. They offer time for a break, the possibility of taking shelter or even often warming up with a wood fire during long evenings watching the dawn.

As we drive west, the landscapes begin to translate steeper relief. Swedish Lapland offers a summary of its two neighbors. The Stora Sjofallet National Park is a perfect example. Initially, large, slightly hilly wooded areas, then sinking into the park, the mountains are more prominent until you discover the incredible Lake Akkajaure. It stretches over several tens of kilometers and at its north-western end, the Norwegian border is already not very far! 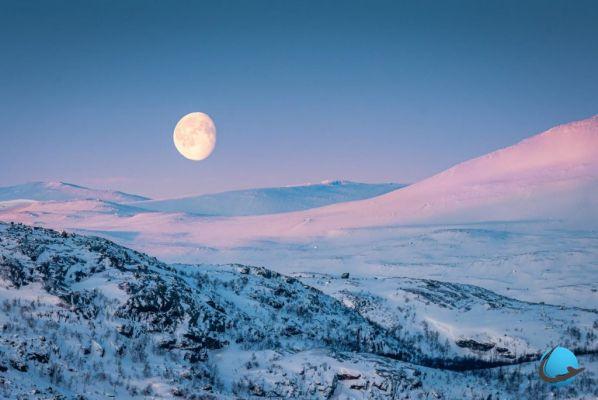 During the winter, the lake freezes over several tens of centimeters and in places the thick layer of ice breaks up on the shallows of the lake, creating a landscape worthy of Lake Baikal in Russia. Walking on it, when silence is king and there is no wind, you can then hear the thud of huge patches of ice crunching around you … Thrill guaranteed. 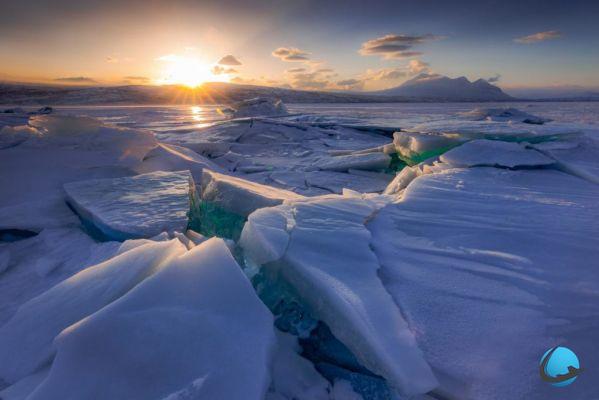 The ice cracks on the lake

Benefiting from a very dry climate, sheltered behind the Norwegian Alps, this region of Sweden is also one of the best places for the observation ofa magical phenomenon of the Far North: the polar aurora.

Not far from there, it is also in the municipality of Abisko that there is one of the most famous observatories for the observation of the northern lights. But before discovering them and understanding the phenomenon a little better, let's make a final stop on the country that completes this picture, Norway.

Norway is the country with the largest coastal frontage in all of Lapland. The result is deeply marked landscapes and climates. From steep fjords to soaring mountains, passing by white sand beaches bathing in turquoise waters, this winter setting will not leave you indifferent. 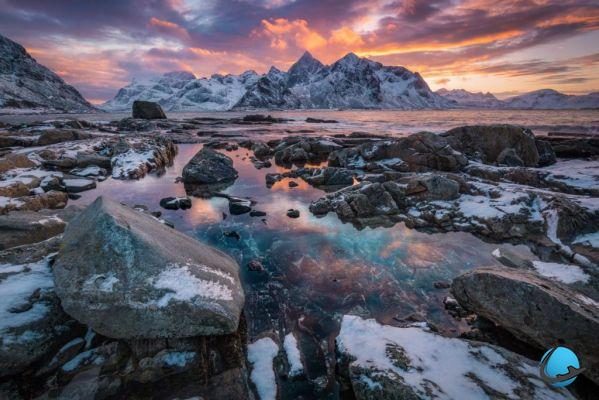 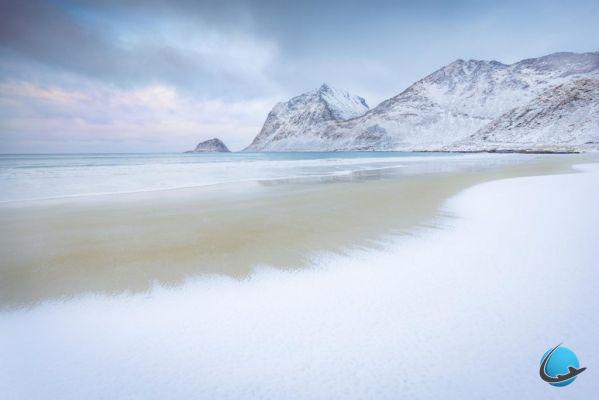 On some part of the coast, the fjords are so numerous and imposing that it is not uncommon to have to embark on a boat to reach the opposite shore, or even certain isolated islands. There are also many tunnels to pass through certain mountain ranges and sometimes even under the sea! 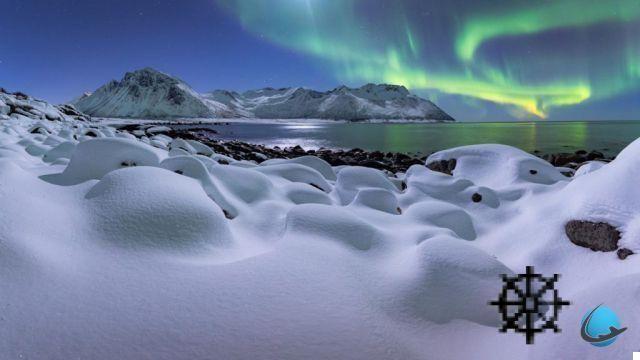 Norway under snow in winter

In addition to the landscapes for which it is famous, parts of the Norwegian seafront offer a first-rate decor to observe the Northern Lights in Lapland. Among these, the most famous are the islands of Lofoten, Senja and Vesteralen, a real digest of what Norway has to offer in terms of landscapes.

Focus on the Northern Lights

Luminous phenomenon arises from the interaction between the solar winds and the Earth's upper atmosphere, they can take different shapes and colors. We speak of the northern lights in the northern hemisphere (and therefore in Lapland) and the southern lights in the southern hemisphere (as in Tasmania or New Zealand for example). Auroras appear around the magnetic poles because it is only from these regions that the solar particles manage to pass the magnetic shield which protects the Earth from solar radiations.

This is why, given its high latitude near the magnetic north pole, Lapland is one of the best regions in the world to contemplate this phenomenon in winter. 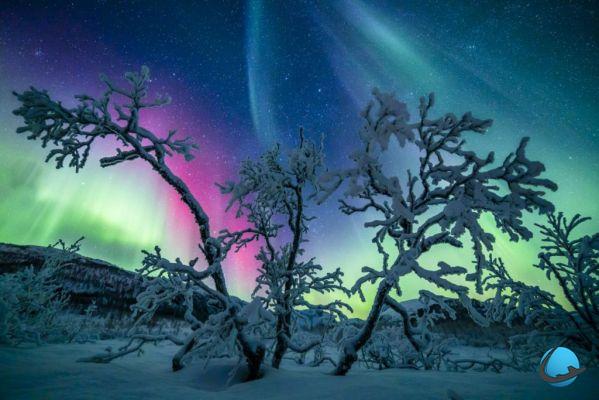 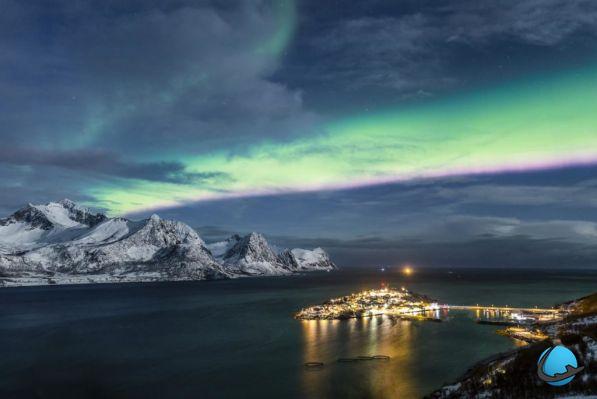 Observable after dark, the period to admire them is approximately from the beginning of September to the end of March. The rest of the year the sun is too present (midnight sun in summer) to allow a fairly dark sky and therefore conducive to their observation. The aurorae occurring most of the time near the poles, you need to be at a high latitude. After 66 ° N or arctic circle, you enter the area suitable for their observation regardless of the country you choose to go. It is only during major events such as solar flares for example, which can create geomagnetic storms, that you will be able to observe them at lower latitudes. 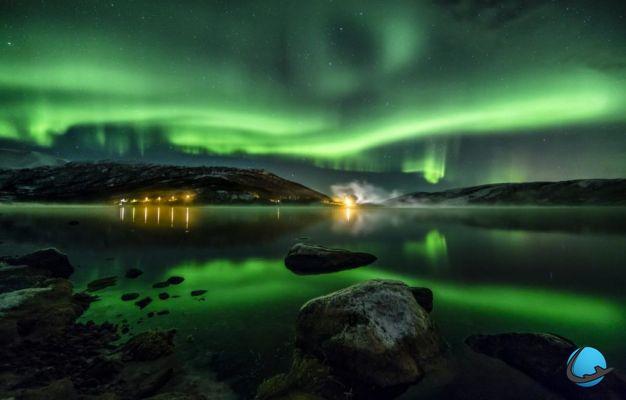 The mystical lights of the Northern Lights

If by any chance you wanted to try your luck, prefer the months of February and March. As these are generally the driest months, your chances of having clear skies will be even greater.

Now that we have briefly presented Lapland in winter and some of its treasures, all you have to do is choose which country you want to see the aurora in! Unless you decide to cross it, as do some photo travel agencies that offer photo tours in Lapland.

Discover the history and culture of Marrakech ❯

add a comment of Discover the fabulous landscapes of Lapland in winter, and its northern lights