Discover the history and culture of Marrakech 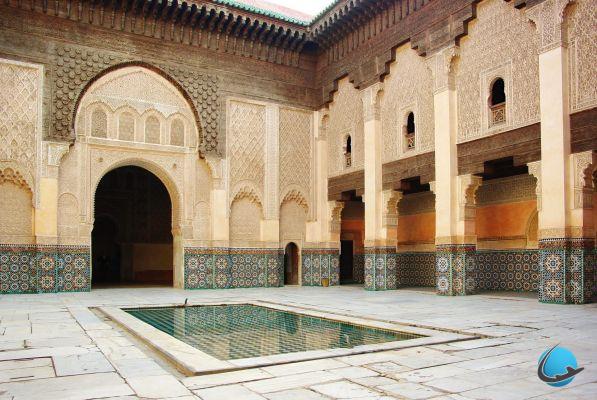 There is no lack of superlatives to qualify Marrakech. And for good reason, the imperial city with its exceptional architecture is a crossroads of cultures. At the foot of the High Atlas, at the gateway to the desert and a stone's throw from the Atlantic Ocean, discover all the culture of Marrakech!

Geography: between mountains and wonders

The decor around Marrakech has something to dream of: at the foot of the High Atlas mountains, at the gateway to the desert and close to the Atlantic Ocean. In winter, the snow-capped mountain peaks stand out from the city.


The Atlas at the gates of Marrakech

Despite the extreme drought of the region, it is the parks, gardens and trees lining the main avenues that we remember from Marrakech. The city is a huge oasis of great plant diversity, crystallized by its palm grove of 130 hectares! 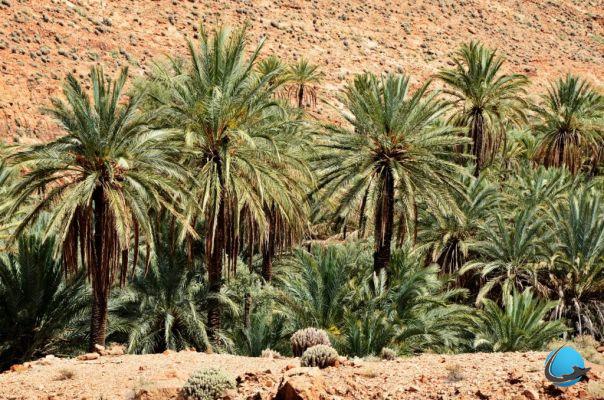 Marrakech is the fourth largest city in Morocco after Casablanca, Rabat and Fez. The imperial city is organized into two spaces: the original city (the medina) and the new city, built when Morocco was under French protectorate. On the outskirts, mainly residential districts are sprouting up like mushrooms. Located very close to the Atlas chain, Marrakech is an ideal place for skiing! Discover the snow-capped passes of the Atlas Mountains, in our article on skiing in Morocco.

A modern city looking to the future

Marrakech must face the problems of its extension, because the city will become saturated in the short term if the urban and demographic growth are not controlled. The city is at the crossroads crossing Morocco from all sides and thus has one of the best connections in the country. 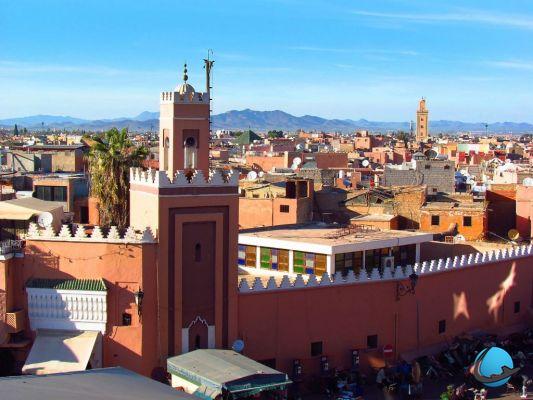 The beauty of Marrakech

Marrakech is today a dynamic city, which can foresee the future serenely. Having been able to take advantage of its environment of great beauty to develop tourism, it is the entire local economy that has been turned upside down: real estate, commerce but also craftsmanship is doing very well.

The origins of the founding of Marrakech date back to the 11th century. From this time, Sultan Youssef ben Tachfine, of the Almoravid dynasty, decides the construction of an irrigation network in this arid region. This ingenious system made it possible to provide the population with water and to grow the first palm trees of its famous palm grove.

Under the leadership of the Sultan, the culture of Marrakech is enriched. Indeed, it quickly becomes a great cultural and artistic center of the Islamic world, as well as a powerful economic crossroads between the Maghreb and black Africa. The Almoravids being men of faith, many monuments (mosques and Koranic schools, or the Qoubba, an ablution fountain) are erected alongside palaces with lush gardens. These works greatly beautify the city and when the dynasty died out in the 12th century, their successors had in their hands a real architectural gem. 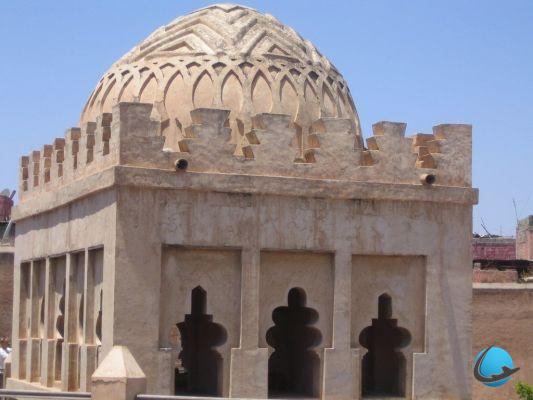 But the succession does not go smoothly. The Almohads exterminate the Almoravids and destroy most of the buildings. They rebuild on the ruins of religious buildings. This is the case of the famous Koutoubia mosque, built in place of a palace. The irrigation system was perfected and the aura of Marrakech then extended to Muslim Spain.

Following a new war, the Merinid dynasty succeeded that of the Almohads. This period corresponds to a decline of the city, until then capital of the empire… for the benefit of Fez.

The city nevertheless regains its rank in the 16th century and shines even more beautifully. A new dynasty takes control of the kingdom: the Saadians. Extremely rich, they embark on an immense policy of restoration and embellishment of the city. We can find some remains of tombs of this dynasty in the city. 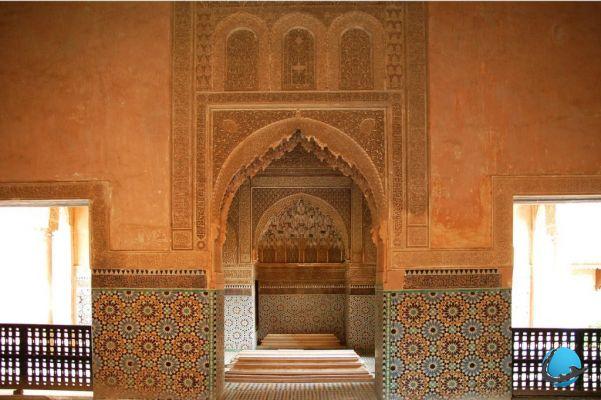 The heritage of the Saadians

Marrakech definitively lost its status as capital in the 17th century, by the will of the Alaouite dynasty, still at the head of Morocco today. Moribund, the city will wait for Moulay Hassan to come to power to restore its image. This great sultan will make it his main residence. Then will follow the period of the French protectorate and the construction of the new town, then the country's independence in 1955.

Since then, the city lives a new period of cultural and economic prosperity, thanks to the development of tourism, the emergence of a wealthy social class and the influx of Westerners settling in the old town. She now exhibits her culture in various museums, such as the Marrakech Museum.

Since its advent, Marrakech has been a city with an important cultural mix. Oriental, Berber and Andalusian influences are evident throughout the city. This is reflected in architecture, art, crafts, gastronomy and gives Marrakech a unique art of living.

The architectural peculiarities of Marrakech are too numerous to list. But impossible not to mention the color which covers the ramparts and which earned it its nickname of "red city". This inimitable color is also visible on some rather bare facades of the riads in the medina (old town). If you push open the door, a staging of ceramics, mosaics, plants and fountains awaits you. These dwellings, prized by Westerners in particular, are a mirror of finesse and the skill of local artisans. They perpetuate ancestral know-how by restoring these houses.

Moroccan cuisine: the crossroads of flavors

Spices, dates, sun-kissed fruits and vegetables, olive oil, honey… the culture of Marrakech is also the most tempting flavors of Morocco. Couscous, tagines, pastillas and mint tea are the pride of a country world famous for its gastronomy. They have a special flavor if they are tasted in the night and intoxicating atmosphere of the famous Djemaa el Fna square! 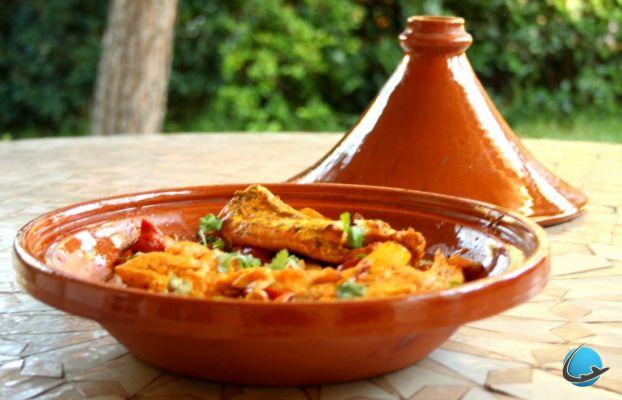 A city of art and history

Since the 19th century, Marrakech has exerted a fascination on the artists from all over the world who have visited it. This past has given rise to a number of vocations among young Moroccans., which combine tradition and modernity in their works. The artistic life is therefore very dynamic and a number of exhibitions and vernissages are organized each year, in particular at the museum of the city of Marrakech.

The meaning of the word "riad" means "garden". By extension, it designates traditional Moroccan houses, built around a patio and located in the medina (old City). These houses are closed to the outside and therefore cultivate a certain mystery. We can very well walk in the streets of the medina without suspecting that all around us are architectural gems. The interior layout is rich in plants, fountains, mosaics and other arabesques. Several rooms are typical of riads and are part of the culture of Marrakech, such as the patio, the hammam or the roof terrace. The riads are extremely sensual houses where the rustling of the water mingles with the essences of the bougainvilleas in a chiaroscuro game. 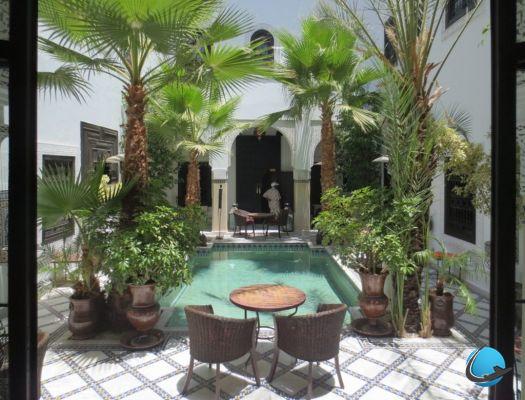 The benefits of tourism

Marrakech is full of these "dar" ("house" in Arabic). Nevertheless, they had been neglected by the wealthy populations, who preferred for a time the modernity of the outlying districts to the insanitary conditions of the medina. But with the explosion of tourism in Marrakech, major renovation works in the city center have been undertaken: their consequence was to put the riads back to the taste of Moroccans and Westerners. A large number of riads are now converted into restaurants or hotels. It has also been observed for fifteen years that many Westerners have acquired riads in order to make them their second home or to reside there all year round.

The medina and its souks

If they are sometimes threatened by a concrete renovation, the renewed interest in riads has made it possible to boost the craftsmanship of construction in Marrakech. So that at the same time as this return to favor of the riads, the medina has been enriched with new craftsmen that you can observe in the souks. The souk is huge and it is difficult to find your way around. Several districts make it up: that of the dyers, that of the blacksmiths, the Koranic school, etc. Do not hesitate to discuss the prices, which are often well above their real value! It is also part of the culture of Marrakech ... 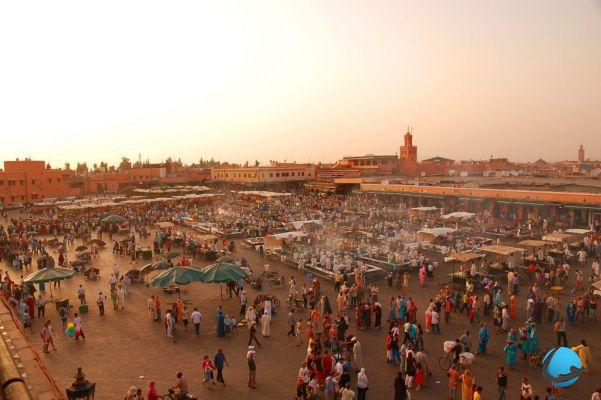 The lively medina in the evening

You now know all the culture of Marrakech! All you have to do is discover its essential visits and prepare your stay with our complete guide and our many other articles.

Discover the history and culture of Poland before your trip! ❯

Morocco: an abandoned church transformed into a work of art

Morocco with the family, the essentials to know before leaving

Our complete guide to visit Morocco

Add a comment from Discover the history and culture of Marrakech