Azerbaijan, a country unlike any other 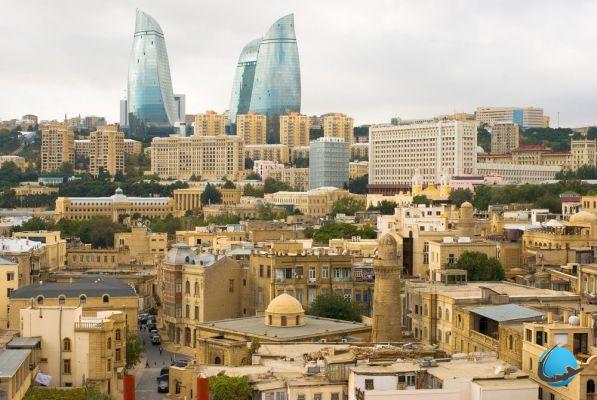 Azerbaijan is a country marked by oil. Between the Caucasus, Central Asia and Iran, there is a country unlike any other. Oil rigs are everywhere around Baku, the capital, and it was one of the first countries won by the black gold fever. But it is also thanks to oil that it has become a rich country - even if this has given rise to conflicts and enormous social inequalities.


Today, Azerbaijan tries to find a place in the tourist market. That's good, you will see that there are many wonders to discover while traveling.

The main things to see and do in Azerbaijan

Yanar Dag or the Scorched Mountains

This exceptional site is home to pockets of gas that burn continuously since the 1950s. On the Absheron peninsula, flames can be seen shining up to 10 meters in height.

North of the Caspian Sea, not far from Baku, in the village of Mehemmedi, it is a phenomenon to discover absolutely. It is a mystical place and the opportunity to make a beautiful hike.

The turmoil of the Azerbaijani bazaars

You can find everything there in a very lively atmosphere. This is the opportunity to buy hazelnuts, grapes, almonds for green or black tea. Tea is an element that is part of the social life of the country.

This other curiosity of the country even makes it possible to enjoy the therapeutic benefits of mud thanks to real “muddy volcanoes”. The Gobustan reserve is home to gazelles and wild cats as well as superb petroglyphs.

In another style, you must also take a detour via Lahij and its craftsmen with ancestral know-how with colorful rugs, finely crafted objects.

Passing through the capital Baku

The Silk Road and its caravanserais are always very animated. The most beautiful are found in Baku and Sheki. Initially, they were truck stops. They always have low, vaulted rooms, sometimes with a floor and open onto a large central courtyard. We take a trip back in time for an evening or a night.

Baku is the capital of Azerbaijan and an important commercial hub for centuries. It is a splendid old town which is home to both caravanserais and futuristic buildings.
We visit the palace of the Shirvan shahs, the tower of the Virgin, the Multan caravanserai and the ramparts. Nearby, the beaches with lunar and volcanic landscapes. It may be useful to remember that the city hosted its first Formula 1 Grand Prix in 2016.

Second largest city in the country, Gandja is a historic city located at the foot of the Lesser Caucasus, along the Koura river. We visit its historical heritage and its sanatorium.

Caviar as a souvenir?

Finally, it's hard to talk about a trip to Azerbaijan without talking about caviar. In fact, nearly 90% of the world's caviar comes from the Caspian Sea. Today, protective measures have been put in place to regulate production, but it remains a tasty memory to bring back at the end of your stay!

The official language of Azerbaijan is Azeri, also spoken in some regions of Iran.

Azerbaijan has several climates. Semi-arid in the east, continental in the west, temperate along the coast… Baku is pleasant to visit all year round, even if the winter can be harsh. Annual precipitation is low throughout the country.

A visa (35 euros in 2017) is required for travelers wishing to visit Azerbaijan, except for nationals of countries affected by the special regime.

Due to persistent geopolitical conflicts, certain areas are not recommended, in particular those of Nagorno-Karabakh (on the Armenian border), Dagestan (on the Russian border), as well as the Iranian border.
On the other hand, there are no specific recommendations for other territories, within the country and along the coast.

As always, we invite you to consult the France Diplomatie website before leaving on your trip.

By Air: There are many connections between Western Europe and Baku International Airport (GYD) with companies like Aeroflot and Turkish Airlines.

Babymoon: our advice to better live your pregnancy on vacation ❯

add a comment of Azerbaijan, a country unlike any other