Where to dive with sharks in the world?

Wild or lazy, mysterious or gregarious, the shark is one of those lords of the oceans that never ceases to fascinate. Diving with sharks thus remains a magical experience, whether they are harmless or really dangerous for humans. But what are the best safe places on the planet to dive with sharks?

Where to snorkel with sharks safely?

If we remain fixed on the image of the teeth of the sea, we must know in reality that sharks contain more species that are harmless to humans than dangerous. Some can thus be observed at shallow depths, in lagoons, with a dive without bottle.

Swim with sharks in Polynesia

La Polynesia is probably among the most beautiful places in the world to swim with sharks, without a bottle and in complete safety. The most famous shark spot is certainly the Shark Bank north of Moorea, whose blacktip sharks can measure up to 1m50. Nearby, dolphins and rays can be observed and approached without great difficulty: a paradise! For an encounter with sharks while scuba diving, the Tuamotu Archipelago, and in particular the lagoons of Rangiroa and Fakarava, are world temples: the density of sharks, in particular lemon sharks and hammerhead sharks, is simply impressive! . 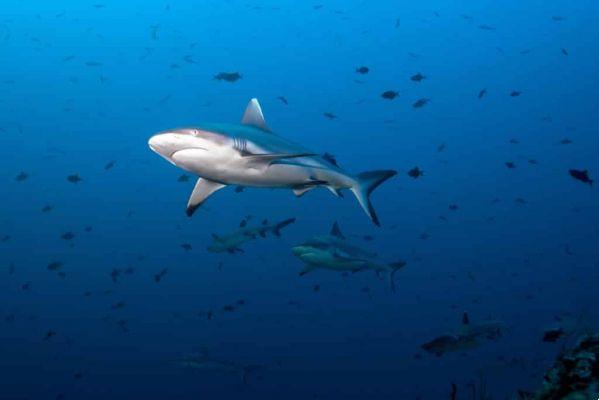 Snorkeling with sharks on the American coasts

On the American side, the most beautiful shark snorkeling spots are located near Belize, with its famous Shark Ray Alley off Ambergris Caye. Some nurse sharks reach 3 meters, and guarantee you a moment of great beauty. East of the Guadeloupe, the channel of Petite Terre allows you to move less than a meter from the edge to see lemon sharks, while it is sometimes possible to see a few barracudas 4 to 5 meters further.

But the most exceptional site is probably that of the Galapagos Islands, and more particularly the island of Isabella with its formidable lava tunnel Los Tuneles, where sharks and seahorses live together.

Where to snorkel with sharks in Asia?

In Asia, the Thailand (Shark Bay to Ko Tao) or the Maldives (Atoll of Velidhu) also allow you to spend a dream moment, watching these lords of the seas who present no danger to man, in any case as long as you respect the essential rules, the ba-ba in short. Admire without trembling!

Where to go scuba diving to observe sharks?

For more experienced divers, nothing beats scuba diving to swim with sharks in depth, with species with sometimes impressive morphology. This is the opportunity to be able to approach the whale shark, the largest fish in the world, which can measure up to 20 meters for 30 tons! Find out well before you go, because the shark season is not the same from one country to another. 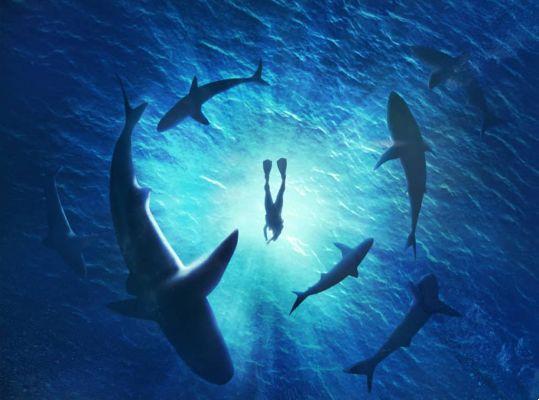 Diving with sharks in America

On the American continent, you will favor the Barrier Reef of Belize, its neighbor the Honduras (Islands of Roatan and Utila) or the Costa Rica whose Coco Island is also famous for its hammerhead sharks and silky sharks. But the essential in this region of the world probably remains the Bahamas, one of the most famous divers' paradises in the world.

To see sharks, choose the island of New Providence in particular: Stuart, from the Stuart Cove's club, has led the greatest celebrities to meet sharks, including James Bond (yes, yes!); it's a safe bet in the Bahamas. Grand Bahama, or the Bimini archipelago, also famous for its dolphins, are also great options.

Where to dive with sharks in Asia, Oceania or Africa?

In Asia, the shark lover can dive in Thailand (Koh Tao), in Sogod Bay or Malapascua in the Philippines, or to the Island of Lankayan in Malaysia. African waters also support large populations of sharks, particularly in the Gulf of Mozambique, Madagascar or via Tanzania (Mafia Island). Divers looking for thrills, however, prefer theSouth Africa, in the Sodwana Bay area.


But the most magical place is probably the coral reef of the Fiji Islands, and the archipelago of Viti Levu with its beautiful lagoon. It hosts an incredible population of sharks, with white tip sharks, lemon sharks, bulldog sharks, hammerhead sharks and even tiger sharks. Guaranteed sensations, between admiration and a touch of concern… Still!

Where to dive in a cage with sharks?

While most sharks are harmless to humans, there are a few predatory species that attack them. It is still possible to dive with it, but well protected by a metal cage! These scuba dives with one of the most dangerous marine species in the world, such as the immense White shark, then guarantee a unique moment, between fear and fascination for this king of the seas.

For this unique encounter which alone justifies a trip, the must-see is probably the southern coast ofSouth Africa, off Cape Town, in Gansbaai Bay. Get ready to come face to face with the greatest predator of the seas, a brute of 4 to 6 meters that can weigh up to 3 tons. The power of its jaws, immortalized in the movie Jaws, will remain etched in your memories for life, probably associated with a small shiver running down your spine. No excuse not to go, because this caged experience with guide is open to any diver, even without a scuba diving certificate! It's an experience unique to the mode, with the promise of a great adrenaline rush!

add a comment from Where to dive with sharks in the world?