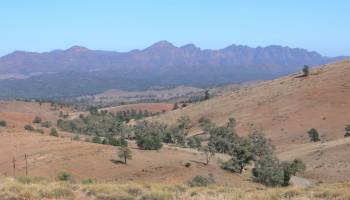 One of the attractions of the Flinders Ranges park is the impressive geological formation of “Wilpena Pound”.

Difficult to visualize before seeing it, it is a natural basin of 80 km², fenced around its entire perimeter by 500 m high red quartzite cliffs! 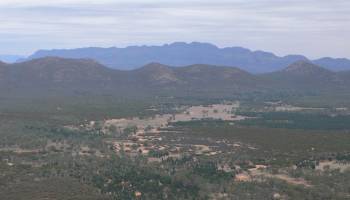 The formation of this basin is due to an erosion of several millennia which has gradually removed the layers of the softest rocks from the interior of the basin, and left a layer of hard rock on its periphery.

But concentrate instead on the aboriginal explanation, much more telling! Wilpena Pound is formed from the bodies of two giant snakes, Akurra.

After eating all the participants in a ritual ceremony, the two snakes, too heavy to move, died of indigestion while surrounding the basin. 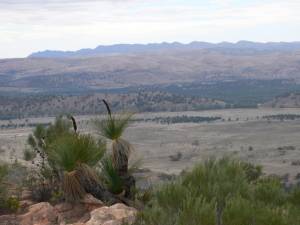 The Wilpena Pound site is the starting point for many hiking trails of different difficulty.

The ascent of the Ohlssen Bagge is, for example, a path of medium difficulty, which allows you to have a view of the interior of the Wilpena Pound basin.

Some circuits last several days, others are easily accessible with children.

The interior of Wilpena Pound is a very fertile area where you are sure to encounter kangaroos, emus, giant spiders and other typical Australian bush creatures!! 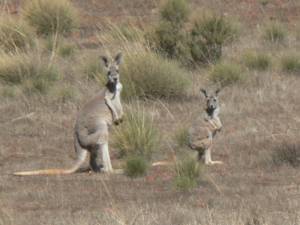 “Wilpena Pound” is located at the entrance to the Flinders Ranges Nature Park, but the basin itself and the viewpoints are only accessible on foot.

The road is paved to the resort center of Wilpena Pound Resort, where you can sleep, camp, and buy the last supplies of water and gas before Blinman.

The park's tourist office will also give you all the information on the region's weather forecasts and the condition of the unpaved roads.


Do not go lightly in this environment.

Don't forget to tell someone about your destination before setting off on foot.

It is advisable to provide twice the water rations during the summer.

Practical information for organizing your trip

>>> Read the beginning of the report