“Circular Quay” deserves special attention, because it really is a key place, both historic and very modern, in Australia.

This is where the first English settlers landed in 1788 to found the colony of New South Wales, Australia's first state.

This is the point from which the entire conurbation of Sydney grew.

And it is still today one of Sydney's major rail, sea and road transport hubs, where thousands of people flock every day.

Once you have arrived at "Circular Quay", you can consider yourself at the 2nd center of Australia, the center of colonial Australia, of European and urban origin, where "Uluru" is the 1st spiritual center of a Ancestral and wild Australia. 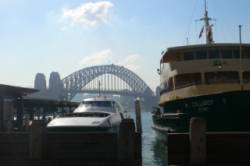 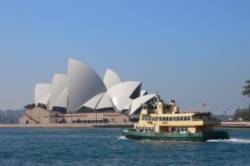 "Circular Quay" owes its name to the fact that the main quay, from which all boats depart for Sydney Harbor, or other parts of Australia, covers the whole of "Sydney Cove", and allows boat departures on all sides.

On the right, the Opera House and its sail-shaped domes appeared in 1973, when the "Harbour Bridge", built by architect JJC Bradfield, already covered the left side of "Circular Quay". since 1932.

Behind you is the whole of the City and the city of Sydney, with its tall office towers and narrow streets stretching south from the bay.

Finally, above you, the metro and the “Circular Quay” station connect all the towns located inland to the city center and to the other part of the bay. 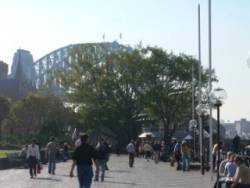 stroll on the port of Circular Quay

A whole part of "Circular Quay" on the left, before arriving at the "Rocks" district and the "Harbour bridge", is a small pedestrian promenade, where street artists, didjeridu shows, and the modern Art Museum.


You then arrive at the cruise ship terminal, where you can eat and have a drink while admiring the permanent comings and goings of the yellow and green ferries of the bay.

A little tip for visiting the Harbor Bridge. 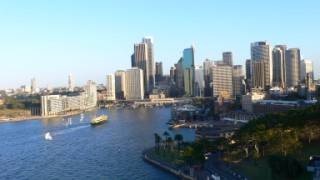 The City that stretches just behind Circular Quay

If you want to have a very good view of Sydney and get a little closer to the famous “Harbour Bridge”, don't hesitate to climb the southern pier of the bridge, the one located in the “Rocks” district.

You can then climb to a viewpoint a few hundred meters higher, but access to the platform is then paying ($10!).

Don't miss the view from the "Harbour Bridge" which is truly one of the best over "Circular Quay" and downtown Sydney.

You will also be able to observe Sydney's "Luna Park", a characteristic amusement park, built in 1935, on the site of the former construction factory of the "Harbour Bridge".

Otherwise, one of the fashionable excursions is to climb the "hanger" of the "Harbour Bridge" using the stairs that were used in its construction (Bridgeclimb)! 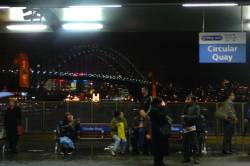 Finally, if you want more than anything to see the port and the bay of Sydney before leaving, do not hesitate to take a short excursion, between two planes, from Sydney airport to “Circular Quay”.


The metro line from the airport is direct to 'Circular Quay' metro station and it will only take you 20 minutes, enough time for one last small dinner on the port before flying back.

Bridgeclimb (climb the "Harbour Bridge" to admire the most beautiful view)

The "Opera Bar" (best located bar on "Circular Quay", at the foot of the "Opera House" facing the "Harbour Bridge")

Here is a selection of general sites on the city of Sydney, which can help you organize your trip.

Public transport in Sydney (for all means of transport bus, train, metro, boat)

add a comment of Circular Quay, the historic center of colonial Australia