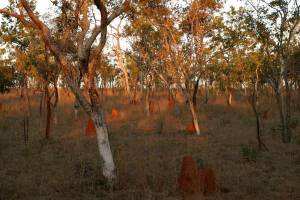 The didjeridoo (or didjeridu) is a favorite purchase for international visitors and has found its way as a musical instrument in bands around the world.

The spelling "didgeridoo" is accepted, but in Australia it is preferred "didjeridu".

This name was invented by the explorers and refers to the sound produced by the instrument!

Before the arrival of Europeans in Australia, the didjeridu was widespread only in the North and North-West of Australia: in the Top End (north of the Northern Territory) and the Kimberley region.

Indeed, to make a didjeridu, one must have two things: trees (especially eucalyptus) and termites that dig the trunk of these trees.

However, it is in the North and North West part that we find the most favorable expanses of bush.

Arnhem Land is renowned for the excellence of its didgeridoos, known here as yidaki, a word from the Yolngu tribe.

It is moreover an Aboriginal rock group Yolngu, Yothu Yindi, created in 1986 which contributed to popularize the didjeridu all over the world. 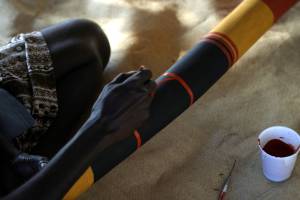 Traditionally, the didgeridoo is an instrument used during ceremonies and played by men only.

The haunting sound of the didgeridoo is accompanied by the percussion of clapsticks, clashing wooden sticks and chants. Its manufacture is long and requires experience.

In the Top End, didgeridoo makers spend hours in the bush, spotting trees whose trunks have been hollowed out by termites.

By tapping the trunks, specialists appreciate their sound and resonance and make their choice.

The tree is cut and then begins the delicate phase of cleaning and shaping the instrument.

Once made, didjeridus are often painted or engraved with traditional designs.


Learning to play the didgeridu requires time and patience.

The circular breathing required by this instrument can be learned but remains difficult to master.

Didgeridoo masters have decades of daily learning under their belt! The best way to get started is to take courses, offered by many shops in Australia. 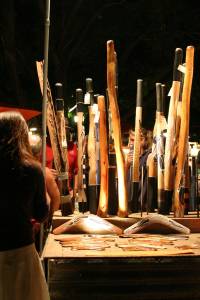 If you want to bring back a didjeridu from Australia, you should know that the market has both very good and very bad...

A good quality didjeridoo, made by the Aborigines themselves is always expensive! Shops are flooded with poor quality didgeridus, sometimes made in Asia for that matter, or miniature didgeridus.

If you want to avoid encouraging the sale of this “handicraft”, abstain! The best didjeridus are sold in the Northern Territory, notably in Darwin, but there are also very good instruments from Arnhem Land in the galleries of Sydney or Melbourne.

In all cases, a certificate of authenticity mentioning the provenance and the name of the artist is a guarantee of quality.

The market is still waiting for an official quality label and we can only hope that it will see the light of day very soon.

add a comment of Didgeridoo, didjeridu or didjeridoo: explanations and purchase advice