The Saint-Gery and Sainte-Catherine districts 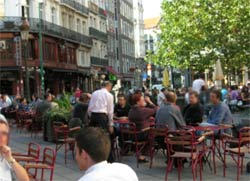 It was just a chicken market on an island, it has become one of the liveliest neighborhoods in the capital.

Very trendy, it's teeming with trendy bars and always full of students.

The Zebra, the Mapa Mundo, the King of the Belgians, on the Place Saint-Géry, you will be spoiled for choice to relax and have an aperitif.

Not far from Place Saint Géry, Rue Antoine Dansaert reflects the development of the district.

Designers, jewelers, couturiers and alternative galleries have invaded the premises.

Notice to lovers of trendy restaurants: there is something for everyone, from the tapas bar Comocomo to the oriental cuisine of La Casbah. 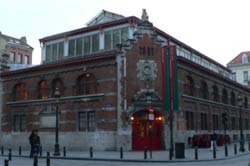 But the heart of the Saint-Géry district is Les Halles. Flemish neo-Renaissance style, a mixture of iron and glass, the architecture of the building is worth seeing.

It all starts with a fountain from the Grimbergen Abbey (like the famous Belgian beer).

We are then in the 18th century, the fountain is the center of a public square which acts as a market. Les Halles were built a little later, in 1881.

For nearly 100 years, they remained a bustling place of commerce. In recent years, the stalls have given way to exhibitions.

To find out about the cultural activities programme, visit the centre's official website.
Finally, the Saint-Géry church and the rue des Chartreux, located behind Les Halles, are worth a look. 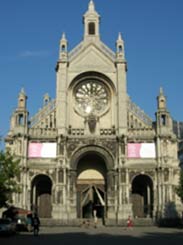 The Sainte-Catherine church, which dominates the square of the same name, arouses interest for the architectural mixture to which it bears witness.

Original, it draws its influences from Gothic, Romanesque and Renaissance styles at the same time.

Located on the site of the Sainte-Catherine Chapel dating from the 13th century, the current church is much more recent since it was built around 1854.


The square is reminiscent of the old port of Brussels whose quays were filled in to build a new one.

From its maritime past, the square today keeps the famous fish and seafood restaurants.

Every day, a fruit and vegetable market animates the square, which fills up especially at lunchtime. Right in the heart of the square, a former power station from the 1900s has been transformed into a center for contemporary art.

add a comment from The Saint-Gery and Sainte-Catherine districts