The center of Brugge

The Burg and the Markt 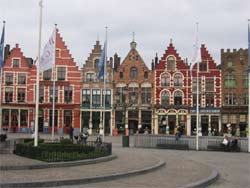 The heart of Bruges is made up of a few must-see monuments and two large squares (the Markt and the Burg).

You are here in the most touristic part of the city, where you can find the most visible and flamboyant symbols of the power of Bruges in the Middle Ages and until the 16th century.

The Markt is a magnificent central square surrounded by traditional houses with colorful facades.

Our proposed activity: Excursion to Bruges and Ghent 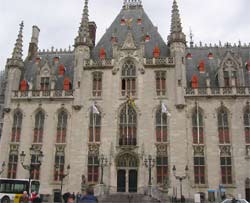 In Gothic style, these houses typical of the cities of northern Europe most often have a relatively narrow flat brick facade whose upper part is cut out in the shape of a staircase.

Dominating the square, the most impressive monument is of course the Belfry, whose chimes regularly resound throughout the city to the rhythm of the European anthem. This huge tower overlooks markets dating from the 13th century and adjoins the impressive provincial palace.

It is so high that you will see it from almost anywhere in the city, serving as a landmark for your stroll. The bravest will climb to the terrace at the top of the belfry to contemplate a beautiful panorama of the city.

If the 366 steps put you off, don't worry: the most beautiful panoramas are along the canals or on certain bridges. 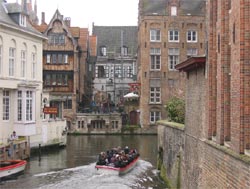 Connected to the Markt by the Breidelsstraat, the Burg is an equally impressive square which notably houses the town hall.

This richly decorated stone building symbolizes the power and splendor of the city's golden age. It was completed in the 15th century.

Inside, the Gothic room has been converted into a small museum telling the story of the city.

Next to the town hall, the blackened stone building provides access to the Basilica of the Holy Blood. Downstairs, it houses a rather austere chapel in the Romanesque style.


At the top of the stairs, the high chapel surprises with its brightly colored walls, columns and ceilings. It is said that the blood of Christ is kept in the basilica.

A constantly present priest watches over him from the top of an altar. For a few coins, you can come and touch the sacred vial and receive a blessing...