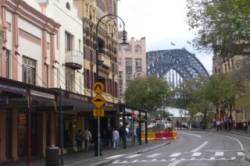 The 'Rocks' area is located just below the southern pier of Sydney's Harbor Bridge, west of 'Circular Quay'.

It was the first inhabited district of Australia where the 1400 English settlers of the "First fleet" settled on January 26, 1788!

Today some houses have been restored and the area is home to art galleries, a market and many restaurants.

Don't miss the "Rocks" district because it is the most historic and oldest urban district that you can visit in Australia! 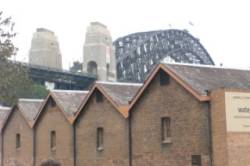 Following the alleys and admiring the houses of this district allows you to understand a little more about the colonization of the continent and the atmosphere of the English colony of the 1st days.

This founding place of Australia is built on the heights of the city, protected from the bay by buttresses of white rock which made it possible to build the first houses and important buildings.

“The Rocks” is therefore a very amusing mix of ultra-English houses all identical, narrow, tightly packed next to each other like in London with the lush and more exotic vegetation of the Australian climate (palm trees, blue water, bats! ).

We are then surprised to see how Australian colonization has tried to recreate an architecture and a very British atmosphere on the other side of the planet in such a different environment.

Although it might seem a little hard to imagine today in the restored and touristy streets of Sydney, the alleys that run through the "Rocks" district have long been considered the dirtiest, most dangerous and most infamous on the continent. Australian.

The district welcomed all the pickpockets, adventurers, bandits and idle sailors of the southern seas.


Of very bad reputation, it was the place of amusement and debauchery of sailors landing in this remote region after months, even years, at sea!

Like most "historic" buildings in Australia, the City of Sydney naturally planned to raze the whole area in the 1970s to build office buildings and wider road access for the “Harbour Bridge”.

It took all the energy and the veto of Australian left-wing trade unions to manage to save this heritage, testimony to colonization.

You will thank them today for being able to stroll through these alleys and for having made it one of the most protected areas of Sydney.

The place of the “Merchants House” 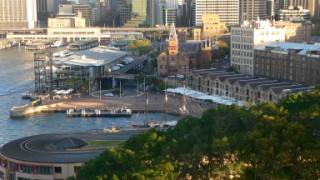 The whole of the first inhabited district of Australia was, of course, built around the sea, the commercial port and the docks for mooring boats.

It was indeed the place of life, animation and the most important activity of the continent.

This is where ships from England, Indonesia or Africa were welcomed to distribute and sell the food, tools and goods essential to the survival of the colony during the first years. 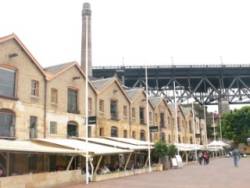 If you want to discover all the historical and cultural aspects of this period, do not hesitate to visit the "Rocks discovery museum" (free entrance), which exhibits many objects, archaeological remains and reconstructions of the life of the neighborhood at different times.

Today the “Rocks” district has become quite trendy. Many art galleries have settled there, as well as many shops and small restaurants.

Don't miss the transformation of Sydney's first port. The former merchant warehouses have been rehabilitated and now house many restaurants.

“The Merchants' House” therefore remains a very pleasant area to come and admire the view just below the “Harbour Bridge” or treat yourself to a good meal with a breathtaking view of the “Opera House” and Sydney Bay!

The ideal (and very romantic!) place to appreciate the climate and the beauty of the country's first city.

The “Rocks” district is accessible on foot from “Circular Quay” in a few minutes. A historical tour of the district is offered to the visitor with audio guides and explanatory panels.

add a comment of The "Rocks" district: 1st inhabited district of Australia