The quarter of Schloss Charlottenburg 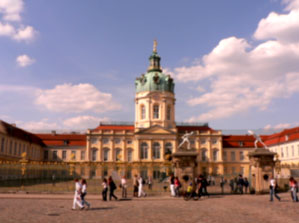 The Schloss Charlottenburg district is in the northwest of the city, a little north of Zoologischer Garten and the Technical University (TU).

There is no real metro station near Charlottenburg Palace.

Better to get there by bus, from Zoologischer Garten.

The visit to the castle is done every day of the week except Monday, and you can buy a pass which also entitles you to visit the park (entrance to which is free) and all the adjoining buildings for only 7,50 euros. 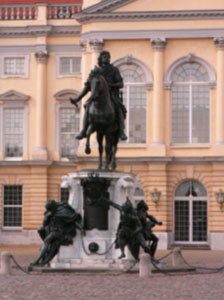 Charlottenburg Palace was the summer residence of the Prussian kings and was erected in the 17th century, although the following century saw many architectural additions.

It is in honor of Charlotte, the wife of King Frederick 1st, that the castle was baptized.

Painting galleries (permanent or temporary) are to be visited but the best remains the visit of the apartments of Frederick II (that of the equestrian statue of Unter den Linden), whose luxury has nothing to envy to the apartments of Versailles).

After visiting the castle, nothing beats a walk or bike ride in the park.

Berlin's river, the Spree, passes through it, and small ponds help to give it a bucolic atmosphere.

In the spring or in September, it is superb.

A few buildings, including the Schinkel pavilion or the belvedere (where there is a fine collection of porcelain, for amateurs), are to be admired from afar, but we will stop in front of the mausoleum (closed in winter), majestic with its Doric columns . 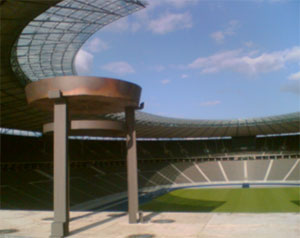 Not really in the castle district but still further west of the city, you can visit the Olympiastadion, the Olympic stadium in Berlin, which was built for the 1936 Games and hosted the France–Italy final in 2006. of the World Cup.

Admission is set at 4 euros. If you're not particularly a sports fan, you can still be interested in all the stigmata of Nazism that dot the place, including the plaques nailed near the Olympic cauldron...Impressive.

> Schloss Charlottenburg can be reached by getting off at U-Bahn stations Richard-Wagner-Platz or Sophie-Charlotte-Platz, then walking.

Or take the bus, number 145 or 210. To get to the Olympiastadion, get off at the U-Bahn station of the same name.

The official website of Schloss Charlottenburg [in German or English] http://www.schlosscharlottenburg.de/

add a comment of The quarter of Schloss Charlottenburg