Day trip to Neuschwanstein and Linderhof castles from Munich

It is in the setting of the Bavarian mountains that King Ludwig II of Bavaria built two of his magical castles, Neuschwanstein and Linderhof. This excursion from Munich will take you to visit these extraordinary castles, heirlooms of Bavaria's fairytale king. On this magical day, capture the majesty of these castles and the postcard-perfect panorama of the Bavarian mountain range. 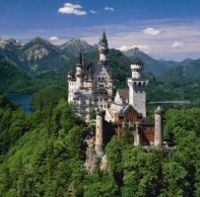 Departing from Munich, visit the smallest of the three royal castles, Linderhof, which was built by King Ludwig II in the 19th century as a hunting lodge. Built in French Rococo style, the castle has a fantastic grotto and Moorish pavilion that can be visited during your two-hour stay. You have the option of a guided tour of the interior of Linderhof.

After leaving Linderhof, you will have a one-stop-shop in Oberammergau, famous for its woodcarvers, rich in painted houses (Lüftl paintings) and Passion Play.

As you approach Neuschwanstein, you will quickly learn why this magnificent neo-Romanesque castle is the most famous castle in the world. It appears through the mist like something out of a fairy tale, and you won't be surprised to learn that the man who crafted its design – King Ludwig II, was considered eccentric. If this all sounds very familiar, it could be that the castle was the inspiration for Disney's Sleeping Beauty Castle.

You'll have four hours to explore the grounds of Neuschwanstein, and the option to join a guided tour inside the castles, if you wish.

Starting point :
Departure from the front of the store KARSTADT Department Bahnhofpl. 7, opposite the main train station. The meeting point is easy to locate and your guide will be waiting for you.