The Grand Place and its surroundings 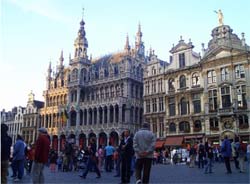 Imposing, masterful, lively, warm, the Grand Place is to be discovered at night for those who have never seen it. Right in the heart of Brussels, this is an unforgettable square which Victor Hugo himself said was the most beautiful in the world.

Since 1998, it has been listed as a UNESCO World Heritage Site.
On its site is the Town Hall dating from the 15th century, the only vestige of medieval times. The two parts of the building are not identical and the tower is not exactly in the middle.

Rectangular windows on one side, ogival on the other, legend has it that the architect Jan Van Ruysbroeck threw himself from the top of the building when he noticed the asymmetry...

In the 11th century, the Grand Place was an open-air market in a dry marsh.

From the 13th century, guild houses were built around Les Halles:

And some, like the Maison des Brasseurs, known as “L'Arbre d'Or”, have become museums. Finally, the inhabitants of Brussels call the Halle aux Pains “Maison du Roi” despite the fact that no king has ever resided there…

Deserted by the Bakers, the Duke of Brabant set up a tax office there. The Maison du Roi, rebuilt in 1873 and renovated in 1985, is now a city museum. 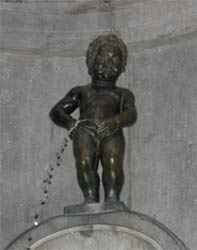 A large monument … which is almost 50 cm high.
This small bronze statue, also known as "little Julien", is the symbol of Brussels.

There are many legends, but the almost official story says that a wealthy bourgeois had lost his son during the city festivities.

Five days later, he found him urinating at the corner of rue de l'Etuve and had a statue built to mark his gratitude. In Flemish, "menneke pis" means "the pissing kid".

And to vary the pleasures, the little guy is regularly dressed in a different way. He even has his official stylist (Jean-Marc Ahne) and a wardrobe of over 600 costumes! 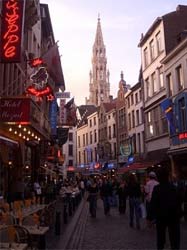 On the sacred islet very close to the Grand Place, a few streets are worth the detour.

Rue des Bouchers: in the Middle Ages, it was populated by butchers, “saucissiers” and tripe makers. Today extremely touristy, it is one of the liveliest streets in Brussels.


Restaurants have multiplied there, but beware. If you have to go there for its charm and warm atmosphere, you should also be careful not to stay there for dinner.

The restaurants are quite expensive and the cuisine is not always of high quality.

Similarly, go for a walk in the rue au Beurre, the Herb Market and the rue Gréty, just for the name and the architecture of the houses. Finally, head to the Royal Galleries.

Terraces, glass roof, restored theatre, the Galerie de la Reine, which connects the Herb Market to the rue des Bouchers, is splendid. It is now home to many luxury stores such as stylists, leather goods, designers and jewellers.

Portfolio: The houses of Bruges

add a comment of The Grand Place and its surroundings