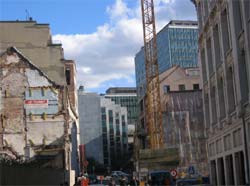 As you walk around Brussels, you will most certainly be shocked by the juxtaposition of old facades with recent concrete blocks and other buildings typical of the 60s and 70s.

The disappearance of the architectural heritage of Brussels in favor of modern buildings is linked to the unbridled real estate speculation that prevailed at that time.

This specificity of the Belgian capital gave birth to a term of town planning:

“Brusselization”, designating the abandonment of a city to real estate developers and its anarchic development due to the absence of a global heritage protection policy.

In Brussels, grandiloquent and futuristic projects were implemented in the 60s and 70s, notably on the occasion of the 1958 Universal Exhibition.

Many Art Nouveau monuments have thus disappeared under the blows of shovels, even if some have been saved from destruction.

There are many buildings and towers that make the city center ugly, even in the Pentagon, a few steps from the Grand Place. These architectural mixes are a visible facet of the Brussels reality that will not fail to surprise you. 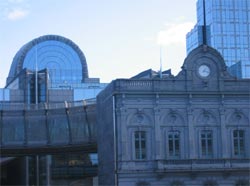 The European Parliament, an example of Brussels facadeism

Decidedly, Brussels has spawned more than one recent architectural term, and not the most positive!

Façadism is a process that consists of keeping only the facade of the old building that is being demolished.

This façade is then juxtaposed with the new functional construction (most often offices).

This urban planning technique was developed in the 80s to respond to the criticisms of heritage defenders against real estate developers.

It does not call into question the destruction of the architectural heritage and does not replace it with the necessary renovation. Above all, it continues to empty the buildings of their inhabitants to replace them with offices generating higher profits.


These old facades attached to modern buildings give a very curious result that you can see almost everywhere in Brussels during your walks. 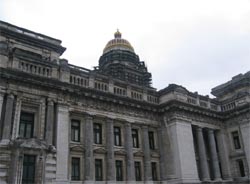 For once, there is no need to accuse crooked real estate developers...

The construction of this gigantic, imposing, overwhelming and titanic building was the fruit of the will of King Leopold II.

Its construction took place between 1866 and 1883 and its area exceeds that of Saint Peter's in Rome.

As I do not want to fall into the crime of lese majesty, I will qualify this achievement as "massive" and you can only share my point of view...

However, I classify this monument without the slightest hesitation in my report on “the great architectural delirium of Brussels”, which really never ceases to amaze us!

From the Marolles district, you can access the courthouse by a free lift. Once on the esplanade of the palace, you benefit from an overview of the city which allows you to get an idea of ​​its general urban planning.

We can of course see the belfry of the Grand Place, but we are surprised to see that it absolutely does not dominate the city, but is lost in a multitude of towers or buildings taller than it.

From there, view also on the atomium, this astonishing balancing act dating from the 1958 Universal Exhibition.

The Association for the Defense of Heritage in Brussels presents a dossier on Brusselsization and studies on urban planning in Brussels: www.arau.org

To learn more about the history of the city of Brussels, the town planning center installed in the halls of Saint Géry continuously projects a fascinating film retracing all the developments from the Middle Ages to the present day. It's free, educational and a great introduction to visiting the city.

The town planning center is a space for information and reflection which aims to facilitate the reappropriation of town planning issues by the citizen.

Take the opportunity to take a tour of the halls which house numerous temporary exhibitions, an arts centre, a café and a center on the environment and energy.

Half day trip to Brussels

The Grand Place and its surroundings

add a comment of The great architectural delirium of Brussels