Nothing in Britain exceeds the grandeur of the central mountains of Lakeland. The road is shaped by the legions of Roman Emperor Hadrian in the first century AD. You will travel over the steepest pass in England, stopping to see the many remains of Hardknott Roman Fort. 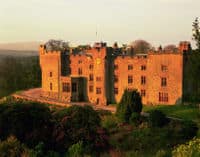 Traveling through the Wrynose and Hardknott passes from Langdale to Eskdale, you will stop at the top of Wrynose for morning tea. After crossing the passes, stop at the Roman fort 1.000 feet from the moor. You have the opportunity to walk around the fort and see the fantastic view of High Eskdale, Scafell and Scafell Pike, the highest mountains in England.

Then you'll ride the Miniature and Ravenglass and Eskdale Railways, before a break for lunch at one of the inns in the valley.

In the afternoon you will continue to Wastwater, a favorite view of Britain, and enjoy the views up to Wasdale and over the lake and the famous 1.500ft scree. Your next stop is the splendid 14th century castle of Muncaster. In its internationally renowned gardens you will find magnificent examples of azaleas, camellias and rhododendrons and you will also have the opportunity to visit the World Owl Trust.

On your return journey to Windermere you will see the most beautiful scenery of Coniston Fells and Coniston Water.

Highlights of the visit:

The “Great Ocean Road”, one of the most famous coastal roads in the world (1/2) ❯