A popular district which is influenced by the nearby Sablon, the trendy side of the Marolles has developed over time.

Between the flea market, flea markets and artists, the transformation of the Marolles is clearly visible. 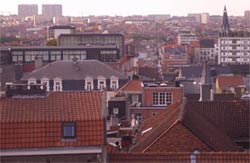 From the Place de la Chapelle to the Place du Jeu de Balle, the Marolles district has its own history. At the time, there were many unhealthy streets and dead ends that were not always very safe.

At the beginning of the 20th century, social housing complexes such as the Cité Hellemans were built and popular shops enlivened the district.

Since 1883, the district has lived in the shadow of the gigantic Palais de Justice. 26 m000, 2 courtrooms, 27 years of construction, it is the largest in Europe.

Oriented in the perspective of the Royal Palace, it dominates the lower town and stands out as a symbol of power. 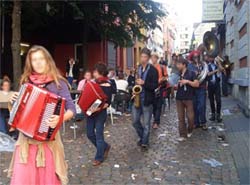 Going down from the Palais de Justice towards the Marolles by the staircase and the rue de l'Epée, you will arrive in the rue des Foxes.

It is not impossible to meet a marching band while passing from one street to another.

Over the years, the trendy side of the Sablon district has spread to Marolles, which is now teeming with “Tribal Art” decoration shops and fashionable antique dealers.

One of the oldest streets in the district, Rue Haute, is the most striking example.

It has stood the test of time, from its route which follows that of an old Gallo-Roman road to the Porte de Halle, absorbing the novelty of antique dealers who have gradually replaced existing businesses. Same scenario rue Blaes and same kind of finds.

The little taste of the origins 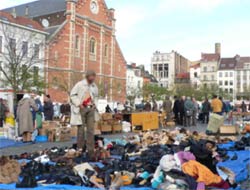 Despite everything, the Marolles district has not lost its roots. You will quickly notice it on the Place du Jeu de Ball which has held its flea market since 1873!


A local colored bric-a-brac set up every day from 7am to 14pm.

A nice youth hostel can be found on rue du Saint-Esprit, straddling the Marolles district and the Sablon.

Address: Rue du Saint-Esprit
The Marolles swimming pool is an opportunity to do some exercise. Address: 28 rue du chevreuil.

The Bruegel Cultural Center is located in the heart of the Marolles, brass band workshops and shows of all kinds, go to their website www.ccbruegel.be/