For an extraordinary walking tour, head north of Berlin and dive into the past at Sachsenhausen, one of Nazi Germany's main concentration camps. As you walk, you'll learn about the history of the camp, which will help you learn about Germany's past and present. This visit will remain etched in your memory for a long time. 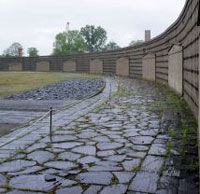 When the Nazis were harbored during the 1936 Olympics, Slavic laborers were forced and coerced into building a huge new concentration camp just north of Berlin with the intention of holding 'enemy' politics in the Nazis' polity , racial and "social". Of the 200.000 people interned, more than 50.000 lost their lives before the camp was liberated by the Soviets in 1945.

The camp was then used by the Soviets until 1950 to detain former Nazis, German soldiers and political opponents of the Communists. Thousands more died of malnutrition and disease.

The key to this walking tour is an informative and insightful narrative provided by your expert guide. During your 3-hour visit to the camp, you will learn important information about the history of the site as you walk through the Appellplatz assembly ground, the Jews Barrack, the punishment cells, the execution grounds and the crematorium, the station from A to Z, the Pathology Laboratory and the camp hospital.

This visit was researched by historian Gabriel Fawcett, who would publish an important eyewitness account of the camp. All tour guides have their own special knowledge in the history of Sachsenhausen, and are experienced in unraveling the complex history of the Third Reich and the Holocaust.

Return details:
Return to the S-Bahn station in Berlin Freidrichstrasse around 16:00 p.m.