140 km south of Darwin, the tiny Litchfield National Park attracts both visitors and locals to the Northern Territory's capital.

It is indeed an idyllic swimming spot, with its four cool waterfalls, feeding natural pools that mostly survive the dry season, from May to October. 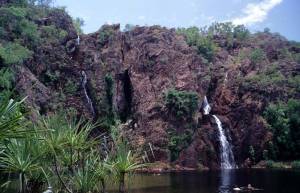 Located on a wide sandstone plateau, the park is covered with typical Australian bush vegetation, with some beautiful areas of rainforest as well.

Most of the natural "pools" are well laid out and swimming is safe. There are also several possibilities for camping in the park.

Probably the most visited waterfall is Wangi Falls, as the swimming area there is large and deep, but if you don't like crowds, it is better to prefer Florence Falls.

Tolmer falls is an impressive waterfall at the bottom of a wide gorge, but swimming is prohibited there due to the presence of a colony of rare bats that the caves in the gorge are home to. 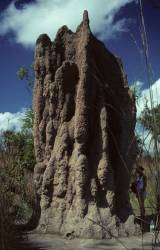 Other attractions in Litchfield Park are the termite mounds. There are different types.

Cathedral termite mounds are imposing structures that can reach several meters in height, entirely made by termites, by mixing their saliva with soil and plant debris.

In Litchfield, one of them is worth a visit, and a sign announces it. You can also see real “fields” of magnetic termite mounds, looking like tombstones.

Their shape and their perfect North-South orientation serves to regulate the temperature inside.

There are also many reptiles in Litchfield, including many monitor lizards, called "goannas" here, as well as the famous frilled lizards resembling miniature dinosaurs. 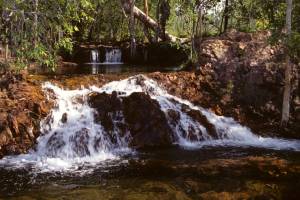 If Litchfield seems less rich and smaller than the nearby Kakadu Park, its accessibility remains its strong point.

Litchfield is easier to visit outside of organized tours than Kakadu.

And unlike Kakadu, swimming is possible there practically all year round and without any danger of estuarine crocodiles.

The official site of Litchfield Park