La Boca – A village in the heart of Buenos Aires

Before you even set foot in the neighborhood, it is likely that you will hear the name "Boca" in passionate discussions... It is indeed one of the two most popular football clubs in Buenos Aires (the second is River Plate).

This sport is in Argentina almost a religion, which leaves no one indifferent. On match Sundays, life comes to a standstill, and all you can hear in the streets is the screams of the supporters and the famous “GOOOOAAAAL” from the commentators, which can last several minutes!

Boca Juniors' stadium, nicknamed 'La Bombonera' for its candy box shape, may be worth a visit on a match day to watch the crowds of (up to 50!) raging fans, chanting and insulting the opposition – a crash course in lunfardo, local slang.

However, it is not recommended to go there alone, with money or valuables. And no provocation: always encourage the same team as the people around you, the opposite is really dangerous!!

Here is our proposed activity note: Island town of Tigre with lunch. 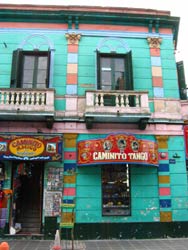 But La Bombonera is not the only thing to see in La Boca. The district also has a very particular style.

Located on the banks of the river and near the port, in a relatively insalubrious area which until recently was regularly flooded, it has been inhabited since its creation by the most popular classes, and like its neighbor San Telmo, by immigrants in mostly Italians in the XNUMXth century, today Bolivians or Paraguayans.

Most of the houses, to escape the floods, are low and built on stilts.

Many are made of sheet metal, the streets are not all paved: you have to be aware of the fact that La Boca is one of the poorest neighborhoods in the center of Buenos Aires.

It is therefore strongly advised not to stray from the busy tourist streets; or visit it after sunset.

The district asserts its independence: the visitor is welcomed by signs “Bienvenidos a la Republica de la Boca” (Welcome to the Republic of La Boca); as well as its cultural identity.

The painter Quinquela Martin, who was born and lived in La Boca, is at the origin of the movement. His works can be seen at the Benito Quinquela Martin Museum. In the 20s, he bought a house and invited the inhabitants of the neighborhood to come and paint it.

Everyone brings their bottoms of pots of paint: the house will be painted with a mosaic of bright colors. Since then, many houses in the neighborhood, especially in the few more touristy streets that form the Caminito, have imitated his model.

We can therefore see very colorful houses, as well as many street painters who offer their works or have set up their workshops around the small interior courtyards.

Just behind the Caminito, a museum of contemporary art, the PROA Foundation, offers interesting exhibitions on the most innovative of Argentine artists. The price of Caminito's success is that it is now overrun with tourists, but it still retains a friendly atmosphere.

It is also possible to see tango shows on the restaurant terraces or in the street. If these shows are rather commercial, the dancers are generally pros. In the evening, everything is closed: it is better to come during the day.


The two Avellaneda iron bridges, over the river, have become the symbol of the district. 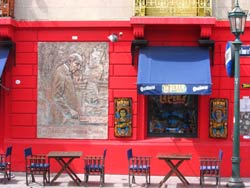 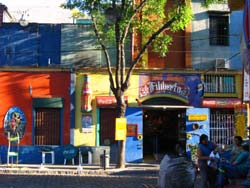 The cultural map of Seville ❯