With a population of 300.000 Aborigines (exterminated as colonization progressed) and only 1000 English settlers at the time of its discovery, we understand that Australia has always been a land of immigration and that the face presented by the australia today is so diverse.

The first waves of immigration 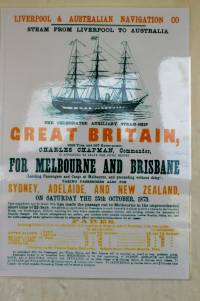 buy your ticket to Australia! 3 months on the boat!

The first migrants arrived on foot on Australian soil from Indonesia and New Guinea from 40.000 BCE.

With global warming, the waters rose and isolated the ancestors of the Aborigines on their continent from -5000 years until 1788, the date of the arrival of the first English settlers!

Immigration to Australia will remain predominantly British until the First World War.

Indeed, the first immigration policy of the young Australian federation (which quite simply lasted from 1 to 1901!!) was to promote a “white Australia” and limit Asian immigration as much as possible.

In order not to be based on physical racial criteria, each migrant had to pass a spelling test in any European language, but chosen expressly by the Australian police officer according to the nationality and the capacities of the candidate. ! 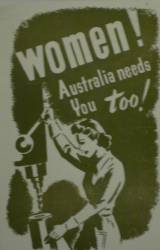 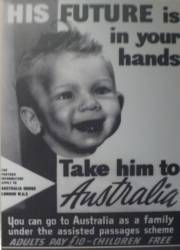 In 1949, 98% of the Australian population was therefore of British origin.

But this situation will change from the Second World War, which saw the arrival of 2 million immigrants, deportees or war refugees, on Australian soil.

Germans, Italians, Greeks, Yugoslavs, that is to say the “white Europeans”, are welcomed and integrated without any problem.

Many programs to encourage immigration of “good” and “perfect” candidates are then organized.

Aborigines, on the other hand, do not have the status of Australian citizens and will not obtain the right to vote until 1967.

Photo caption: Young women and young couples with children were the perfect candidates for the Australian government. (Melbourne Immigration Museum) 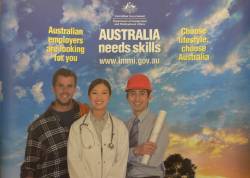 2006 campaign for immigration to Australia

With a new international migrant arriving on Australian soil every 4 minutes, we understand why we hear all the languages ​​of the world spoken when we are in Australia!

The current immigration policy is still very selective, and seeks above all a qualified, educated and healthy workforce.

70% correspond to selection programs based on professional competence and for family reunification.

13 visas, of which about 000% for the African continent, are then granted each year according to the Australian humanitarian reception program (refugees, war deportees, critical situation in the country of origin). 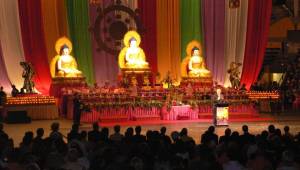 Buddha's birthday festival by the Buddhist community in Brisbane

At the last census, 23% of Australia's population was born outside of mainland Australia.

Apart from Great Britain and New Zealand, the main nationalities represented were in order of importance:


The “Asian” community in general today constitutes the 2nd ethnic group after the white Australians. 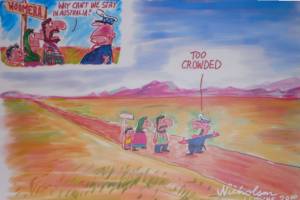 2001 cartoon on the situation of asylum seekers (Melbourne Immigration Museum)

Multiculturalism and respect for cultural diversity are the keywords of the Australian government's current integration policy.

Each culture and creed must be respected and respect others within society.

However, the race riots in Sydney in December 2005 (against the Lebanese population) and the management of the “aboriginal question” show that the integration of all the communities will not happen so easily.

The Australian government was also criticized in 2001 for its treatment of "boat-people" from Indonesia, and the "Pacific solution" policy, which provides for a period of detention by the Australian authorities for potential asylum seekers. .

Some data on the composition of the Australian population