Historical tour in the footsteps of Diego Maradona in Buenos Aires

Diego Maradona received his first football when he was three years old. The rest is now history. During this 4-hour guided tour, immerse yourself in the life of the world's most acclaimed fútbol player. Retrace his incredible career, from the club where he made his debut, and spend some time at the famous La Bombonera stadium. Visit places in the city that mattered in the life of Maradona and learn more about this man who became a legend. 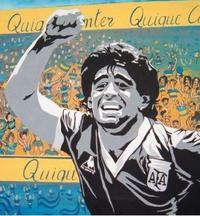 Diego Maradona allowed the Argentina team to win the final at the 1986 World Cup and at the same time became a national hero. After a morning pick-up from your hotel, your 4-hour immersion into the life of the soccer idol will begin with a visit to Argentinos Juniors, one of Argentina's premier clubs. A professional guide will tell you about the early days of Maradona, who played with a youth team at this stadium from the age of 10 and turned professional at 16. With 116 goals, he remains the club's top scorer to this day.

Go to the stadium where Maradona made his professional debut in 1976, the Estadio Diego Armando Maradona, named in his honor in 2004. In the stadium museum, learn how Maradona enabled the club's teams to participate in championships in Argentina, in Italy and Spain.

Then let your guide tell you about Maradona's personal life and his controversial behavior both on and off the pitch. Visit the Church of the Blessed Sacrament, where he was first married, and admire street murals painted by local artists that express popular worship.

End your tour with a visit to La Bombonera Stadium (formerly known as Estadio Alberto J Armando), the Boca Juniors stadium where Maradona spent most of his career. At the nearby Boca Juniors club museum, take a multimedia tour of the No.10 player, his best goals, his life and the fanatical admiration for this man and his legendary abilities on the pitch .

At the end of your tour, you will be dropped off at your hotel.

Argentina: so far away, so beautiful