Hajduk, a historic club in the heart of Split life 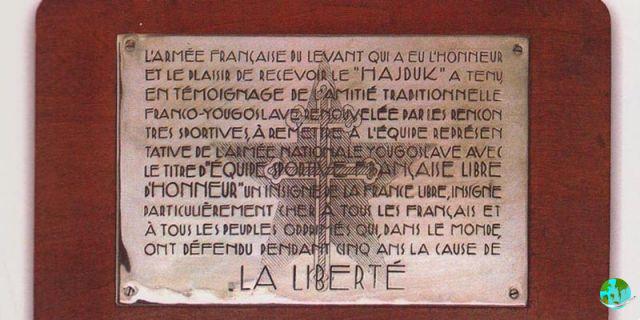 On the walls, the chimneys, the piers by the beach, everywhere and even in the most unusual places, you will not escape it! Impossible to cross the city of Split without noticing what is here a real sign of recognition: the coat of arms of Hajduk Split, the football club and its Croatian checkerboard (red and white) circled in blue. Gossips even say that it is possible to buy the club jersey in all good bakeries!

This club founded in 1911 is to Split exactly what OM is to Marseille or ASSE to Saint-Étienne. More than just a football club, it is an emblem: that of a maritime Dalmatia which, under Tito, had to assert itself against the big clubs of Belgrade in fierce matches against Partizan or the Red Star, and who transferred their rivalry today against the sworn enemy of the capital, Dinamo Zagreb.

Evoking the glorious past of Hajduk over a drink will be one of the keys to the hearts of the Dalmatians who will never stop evoking the epics of the 1970s and the matches against the great Saint-Étienne from a time when Hajduk sometimes reached the quarter-finals of European cups.

If the club is struggling today to pass more than the preliminary round in the European Cup and fills its Poljud stadium more easily during concerts by rock giants than during the insipid confrontations of the weak Croatian championship and if the clashes between Splitois supporters and zagrébois are legion, the club remains an institution in Croatia.

Recently passed into a sports company, the privatized club seems to have recently discovered new ambitions to the delight of its supporters who are only looking for a spark to find their way back to the stadium en masse.

add a comment from Hajduk, a historic club in the heart of Split life