Discover Brisbane by the “Brisbane River” 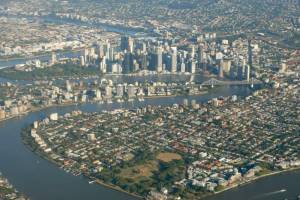 Brisbane along the river

The city of Brisbane has developed mainly along the “Brisbane River”.

By taking the route of the CityCat, the city's public transport bus-catamarans, you are sure to have a complete visit to the city and to reach all the important districts of Brisbane and this for only 5 dollars!

Your journey begins at the University of Queensland, in the far west of the city.

Founded in 1910, this university is one of the top 8 best Australian universities and welcomes more than 30.000 students every year.

Its campus, located in the suburbs of Saint Lucia, is a real city. It contains student residences, a huge library, a supermarket, and even an Olympic swimming pool for amateurs! 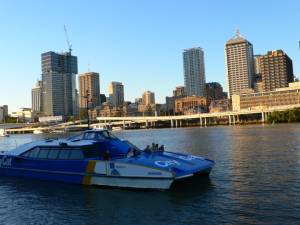 The next CityCat stop across the river is the famous “West End” district.

Due to its proximity to the university, "West End" is a very lively student district, considered the "bohemian" district of the city.

From the CityCat stop, you have to go up Ganges street then Dornoch Terrace (or take the 199 bus) for 15 or 20 minutes to reach a street full of restaurants, bars and trendy shops.

This is one of the ideal places to come for dinner or a drink.

Finally, a few stops further, you will see on the left bank of the river the Hotel and the bar “Regatta”, in the Toowong district.

In operation since 1874, the structure, decorations and wooden balconies that characterize the “Regatta”, are faithful to the traditional architecture of Queensland and have not been modified since 1884.

From the 'Regatta' the CityCat heads directly into Brisbane City Center ('the City'). You will pass under the many bridges that cross the 'Brisbane River' before arriving at «North Quay», and to see the buildings of the center and the famous casino of the city.

'North Quay' is your stop if you want to stroll through the many shops of Queen street, visit the town hall and its museum or enjoy a movie at the cinema.

In front of you, "South Bank" also extends its artificial beaches, its cultural center and its many restaurants: Turkish, Indian, Italian, Thai or Japanese.

The eastern part of the city 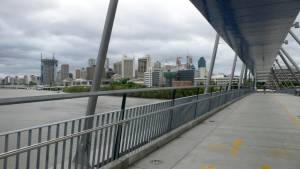 View from the QUT bridge

Starting from 'South Bank', the CityCat heads straight over the pedestrian bridge which joins Brisbane's South Bank at QUT University and the City's Botanic Gardens on the North Bank.

If you have time, the view of “the City” from the QUT pedestrian bridge is one of the best in Brisbane. Not to be missed at sunset. 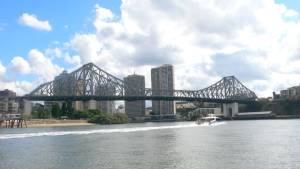 Just around the bend in the river, you will begin to see the towering buildings of « Riverside » and the famous « Story Bridge » de Brisbane.

Designed by the same architect as Sydney's Harbor Bridge, John Bradfield, the Story Bridge was built as a public utility by the city's unemployed during the Great Depression. The "Riverside" district, which extends to the west of the bridge, is entirely developed on the river.

It is mainly an office district but a lively market takes place there every Sunday morning. This is the starting point for an excellent walk along the Brisbane River. 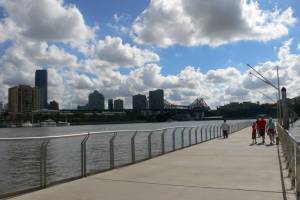 floating causeway in front of the Story Bridge


Feel free to hop on and off the CityCat on either side of the river, as there are plenty of walks along the Brisbane River and you can pick up the CityCat a bit further if you feel like go faster.

A floating causeway has, for example, been built on the north bank of the Brisbane River from “Riverside”.

You can thus pass under the Story Bridge and reach the neighborhoods of « Fortitude Valley » or « New Farm » ; where a new CityCat stop will take you back to the city center.

The "Fortitude Valley" is Brisbane's most famous district for its bars, cafes and nightclubs. Brisbane's Chinatown also sprawls around, with plenty of restaurants, supermarkets, and karaoke.

Finally, the “New Farm” district is a fairly chic district, which offers a lot of small restaurants and a few markets.

The city's CityCats operate every day of the year approximately every 20 minutes (special times on Saturdays, Sundays and public holidays).

Buy a “daily ticket” valid for 2 zones ($5,20) which will allow you to hop on and off the CityCats, buses and trains of the city, as much as you want all day long.

CityCat service of the city: route and schedules of the CityCat

Bridges of Brisbane: site to discover all the bridges that span the Brisbane River

University of Queensland in Brisbane.

The Regatta Hotel in Toowong: planned parties and events

To climb the Story Bridge: best view of Brisbane

add a comment of Discover Brisbane by the “Brisbane River”