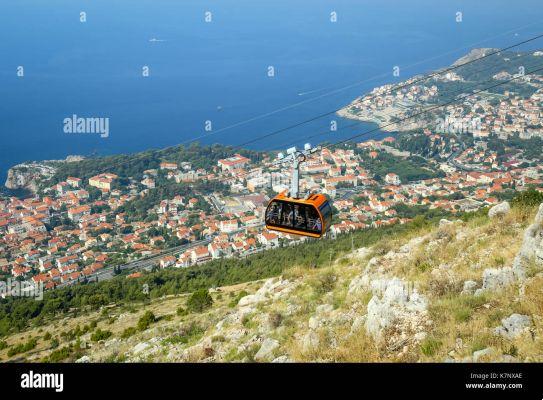 Dubrovnik, the pearl of the Adriatic, is located in the southernmost part of Croatia. The city is renowned for the beauty of its monuments, its imposing 2km long ramparts and its charming atmosphere. Dubrovnik was in the 14th century an independent republic, rival of Vence. For 400 years of independence, the Republic of Ragusa was a maritime force of more than 500 ships and a very important commercial center in the region.

Despite the various damage suffered during an earthquake in 1667, Dubrovnik has managed to preserve its churches, monasteries, palaces and fountains in Gothic, Renaissance and Baroque style. UNESCO recognized this rich cultural and historical heritage and included the site on the World Heritage List.

The surroundings of Dubrovnik are also very attractive. The Konavle region, the southernmost part of Croatia, is famous for its folk traditions, homemade specialties and picturesque little villages. To the north of Dubrovnik lies the legendary archipelago of the Elaphite Islands and the Peljesac peninsula, an ideal place to taste Ston oysters, mussels and “famous reds” such as Dingac red wine.

Then fly to Dubrovnik

Upon arrival, you will be met by our local office and transferred to Hotel Dubrovnik President 4****SUP NL in Dubrovnik – Duration about 30 mins


Welcome drink with the delivery of nominative envelopes and installation in sea ​​view rooms.

Buffet lunch at the hotel

During your cultural discovery of the city you will encounter fascinating history shrouded in legends. Of the monuments you will visit are the Franciscan monastery which houses the oldest pharmacy in Europe and the Rector's Palace which was the seat of government and the residence of the Rector during the independence of the Republic of Ragusa

In the evening, bus transfer for dinner at restaurant MIMOZA


Buffet lunch at the hotel

1st day excursion to the Elaphite Islands with lunch

Then departure by 48-seat bus to the port of Dubrvonik. You will board a Dalmatian “caique” boat. Sailing to Sudurad village. The participants will discover the Skocibuha summer residence which presents how the nobles lived during the 16th century on the islands.

The Elaphiti archipelago, near Dubrovnik, is made up of a group of 13 islands, islets, rocks and pitfalls. Nature has abundantly blessed these charming places with Mediterranean skies, lush subtropical vegetation, a mild climate and special landscapes, while past centuries have given them an architectural heritage. Being a tranquil and well-preserved oasis, they were the beloved resting places of life for the nobles of Dubrovnik.

L´île de Sipan, also called Golden Island, is the largest island of the Elaphite Islands. It is home to 2 large fishing villages Sudurad and Sipanska Luka and a fertile valley of olive groves and vineyards.

At the time of the former Republic of Dubrovnik the island had more than 40 summer residences of nobles, of which only one remained intact: the Skocibuha residence located in the Sudurad village. The hosts of the private castle invite you to visit their property

L´île de Lopud, the middle island, is only 15 minutes away from the island of Sipan. Lopud is very famous for the large number of sailors, diplomats from the island like the famous commander, shipowner Miho Pracat whose bust can be found in the Rector's Palace in the city.

The island is made up of a single village to the west which is home to a large number of historical monuments, and sandy beaches found in Sunj Bay to the southeast.

Beautiful indicated hikes lead you to the top of the island, to the Spanish fort from where you have a splendid panoramic view of the archipelago.

Welcome glass. Then sail to Lopud Island. Landing in the village and crossing the island on foot. On the beautiful sandy beach will be served a BBQ.

2° The Konavle, back to tradition

The landscape of the beautiful Konavle region consists of fertile valleys surrounded by mountains that form a natural border with the Republic of Bosnia and Herzegovina on one side, and high rocks overlooking the sea, descending to the bay of Prevlaka, Molunat and Cavtat, on the other side. Very varied, the landscape of Konavle nevertheless reveals a very particular harmony which reigns between its intact nature, its cultivated cultural tradition resulting from a rich agricultural industry, an authentic architecture of stone, statues and objects of worship and a rich tradition folkloric, whose charming and harmonious attributes find their expression in popular costumes and in the beautiful women who wear them. Different are the ways that are offered to the visitor wishing to discover Konavle and enjoy it to the full: rural tourism, traditional folklore shows, walks or bike rides and excursions to visit places of historical interest such as archaeological sites or fortifications, or natural parks, including the Ljuta torrent.

Departure from the hotel will be organized in Toyota pick-up jeeps – with 5 seats and driven by the participants themselves apart from the lead car. (Also note that you have to save space for 1 guide and 1 instructor)

During the discovery by jeep the participants will discover the traditions of the region through visits and tastings at the honey producer – the production of flour and at the olive oil mill of the specialties of the region such as the cheese prepared in the olive oil.

Typical lunch of meat cooked under a bell

Depart from Dubrovnik, stretching the Adriatic coast north towards the Pelješac peninsula, on which diligent farmers have managed to keep the land fertile for centuries by working hard. Famous wines of controlled origin grown in Dingač and Postup, are the most valuable gifts that will delight every wine lover and connoisseur.

Mali Ston, "the capital of Croatian oysters", is a small typical village by the sea, wedged between the peninsula and the coast. Mali Ston lives to the rhythm of this "inland sea".
Its very rich waters, where oysters and mussels are raised in particular and where several varieties of fish and seafood are caught, supply the local restaurants.
The ruins of the 14th century castle overlooking it offer a surprising view of the coast and the many islets. Discovery by boat of oyster and mussel farms and tasting.

On the way back stop in Trsteno Gardens – Croatia's oldest Renaissance garden with a summer residence of a Dubrovnik noble family from 1602. The garden contains a unique collection of 500 species of exotic plants.

In the early evening, transfer by bus with French-speaking assistance at the East West Beach club restaurant for the closing dinner:

This restaurant is located on the most beautiful beach in Dubrovnik, at the foot of the ramparts. The beach will be decorated with torches. The welcome cocktail (Kir Royal) can be served on one of the terraces. Dinner on the terrace in a lounge style / buddha bar – background music. After the meal, disco evening in the night club.

Halfway to the Ploče Gate, at the eastern entrance to the Old Town, opposite the Dominican Convent, there is a completely new place. The most exquisite gastronomic pleasures, atmosphere and music are offered in this place surrounded by stones. The stairs lead to a large terrace on the Saint Luc fortress from where it is possible to go for a walk on the ramparts of the city. Intimate openings overlook the sea and the old port.

The restaurant's international cuisine has an irresistible aroma and boasts a wide selection of meats and the best fish in the region.

Free morning for shopping and enjoying the hotel facilities.

Then transfer by bus with French-speaking assistance for the return flight to France:

Surrounded by greenery, the President Hotel is located on the Babin Kuk peninsula, about 5 minutes' drive from the city centre. The hotel has its own private beach. All rooms are characterized by a modern atmosphere and benefit from the latest amenities.

PROPOSALS SUBJECT TO MODIFICATIONS AND AVAILABILITY.

REQUEST FOR QUOTE AND AVAILABILITY

Climate in Stutterheim: when to go

Tour of the wine regions in a sidecar with driver