Set sail from Munich for a day trip by coach to Berchtesgaden, Hitler's mountain retreat and southern headquarters of the Nazi Party. The Eagle's Nest is a mountain lodge built by the Nazis, which is a major attraction for the region. Perched 1 meters above sea level on the summit of Mount Kehlstein, this lodge enjoys views of the Alps, which are among the most magnificent in Germany. Ironically, Hitler suffered from vertigo and rarely took advantage of this exceptional panorama. 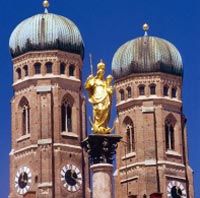 Due to bombing during WWII by the Royal Air Force, there seems to be little left of the presence of Hitler and the Nazi party, however the Eagle's Nest still stands.

From mid-May to October, you can take a bus up the mountain and see the Eagle's Nest up close. The final 390 feet (120 meters) of this journey will be in a brass-plated elevator. During the winter months or during inclement weather when access to the Eagle's Nest is limited, you will instead visit the famous salt mine. Wearing traditional mining gear lets you descend into the depths of the mine where you can see glowing salt caves and an underground saltwater lake.

Starting point :
Departure from the front of the KARSTADT Department Bahnhofpl store. 7. It's easy to locate, it's opposite the main train station.