An easy way to start your romantic day on the Rhine: show your KD ticket on board a KD ship and enjoy all scheduled day cruises on the Rhine and Moselle rivers for a whole day. The extensive and reliable daily schedule allows you to disembark as often as you like at numerous stops and spend as much or as little time as you like. 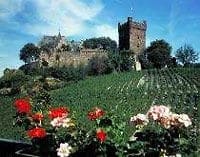 Use the pass for a one-way ticket to move between towns, or perhaps you prefer to use it as a round trip to spend a day elsewhere along the river, the choice is yours!

Without committing to a certain route in advance, the Rhine Pass allows you to enjoy the Rhine Valley with its many beautiful castles, the endless vineyards, the Lorely and much, much more. It's a fantastic alternative to rail travel, while viewing the Rhine Valley from its best vantage point – the Rhine itself!

The Rhine Pass is valid on all KD cruise days scheduled between Cologne and Mainz, as well as the Moselle between Koblenz and Cochen, with the exception of special themed cruises, and cruises that include a catering service.

Starting point :
The cruise departs from the KD landing point in Mainz.
You can board the ship at any of the marked areas according to the KD schedule.
Just show the voucher when boarding or disembarking the KD ship. The Rhine Pass is valid on all KD scheduled day cruises along the Rhine between Cologne and Mainz.

Return details:
You can disembark the ship at any of the marked stops between Cologne and Mainz, as well as the Moselle between Koblenz and Cochen, at your leisure.

add a comment of KD Rhine Pass from Mainz