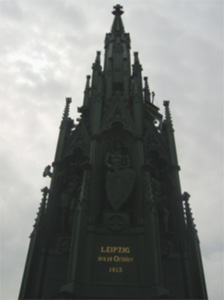 The district of Kreuzberg (literally "the mountain of the cross") was once a working-class suburb of the city, but with the urban extension, it is today a central district where the "bohemian bourgeois" have settled...

Both a chic and working-class district, Kreuzberg is populated by pure-bred Germans as well as community members, notably Turks.

It is ideal to start the visit of the district by the famous hill which gave it its name.

It is located in a small park, Victoriapark, near the Yorckstrasse S-Bahn station.

At the top there is a small monument with an iron cross (the famous “kreuz”!) from which there is a superb view of the district. 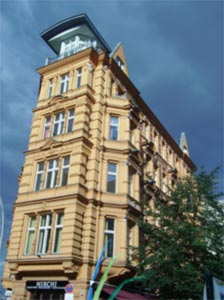 Facade of a building on Bergmannstrasse

To discover a little more about the history of the district, you can always visit the Kreuzberg Museum, but the essential is not there.

You have to go to the popular district of Kreuzberg, “Kreuzberg 61”.

Between Bergmannstrasse and Marheinekeplatz, there are many shops, restaurants of all kinds (including excellent Turkish canteens), street entertainment (in summer, it's every day).

On Bergmannstrasse in particular, there is a lot of entertainment with music all day long and, what does not spoil anything, some of its buildings are magnificent.

It is here that many of the city's artists' studios, trendy cafés and antique shops are concentrated. 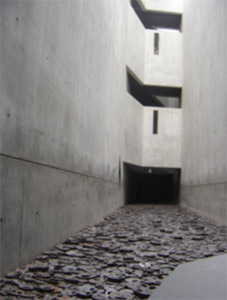 Inside the Jewish Museum…

Finally, for culture, one of Kreuzberg's main attractions is its Jewish museum.

Building with avant-garde architecture (seen from the sky, the roof represents a lightning bolt and was nicknamed "between the lines" by its architect, Daniel Liebskind), it opens a path to the history of the Jews of Germany , of course by evoking the Holocaust.

Indeed this large empty tower of about twenty meters, dark and icy, recalls the Jewish genocide of the Second World War.


However, the museum also allows you to discover the whole history of the Jewish people, with the help of models of synagogues, by telling the story of certain rites and the role that certain great Jewish patrons have played for Berlin's cultural life (in particular to expand the collections of the Museum Island).

For 5 euros the entrance, you can spend half a day there.

> The Kreuzberg district revolves around Mehring Platz (to the west) and Kottbusser Tor (to the east, a sort of Berlin Belleville).

Lines U1 and U7 cross the district from east to west.

Site of the Jewish Museum of Berlin (in German or English) http://www.juedisches-museum-berlin.de/site/DE/homepage.php

La Boca – A village in the heart of Buenos Aires ❯