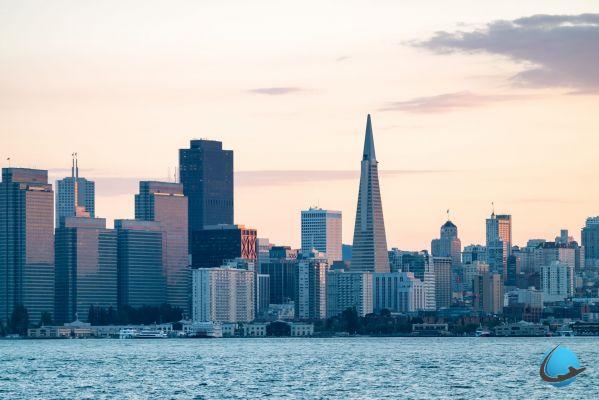 Unlike the megalopolis of Los Angeles, San Francisco is a city that can be visited calmly, offering travelers many picturesque neighborhoods, and unsuspected cultural riches. You will understand why, during a stay in the city of San Francisco, the Americans nicknamed it "The city everyone prefers".

In order to make the organization of your visit more efficient, here is our selection of 10 things to do or see in San Francisco.

The city of San Francisco is closely linked to the Golden Gate Bridge, possibly the most famous bridge in the world. Located to the north of the city, it is best to cross it on foot, to take full advantage of the wonderful view it offers over the city and the bay. Maritime shuttles provide the trip in the other direction and allow you to admire the Golden Gate from a different perspective. Back in port, Fisherman's Wharf is full of small restaurants where you can enjoy excellent seafood. This is also where the ferries leave for Alcatraz Island. 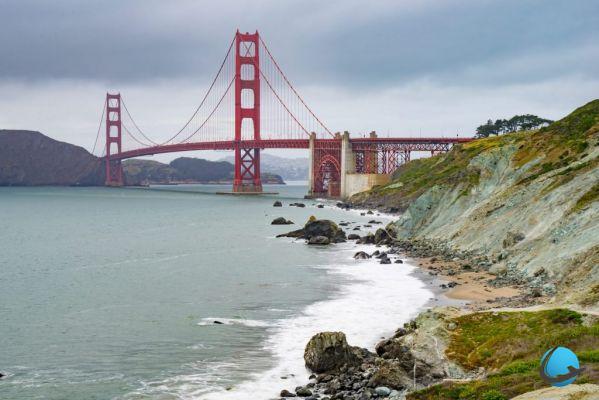 One of the most touristic places in the city of San Francisco, Fisherman's Wharf remains a must-see. The “quai des Pêcheurs” brings together many shops and offers boat trips in the bay.. Movie fans are sure to feast on a dish of prawns at Bubba Gump, made famous by le film Forrest Gump, with Tom Hanks. All along Pier 39, you can stroll as you wish, hello to the sea lions, take a ride on the merry-go-round or visit the Mechanical Museum, vintage as you wish. On the National Day, July 4th, it's the perfect spot to admire the fireworks! 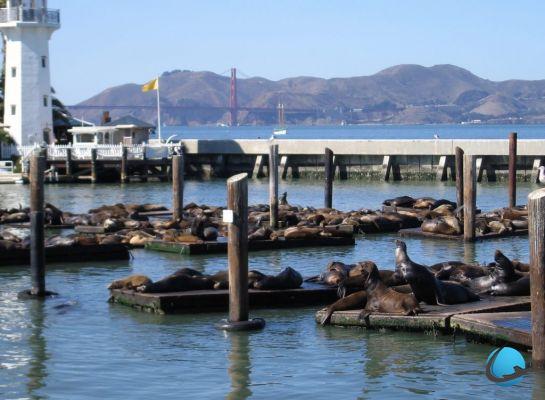 Visit Alcatraz, the former prison turned into a museum

Nicknamed “The Rock” (the rock) as the vegetation is inexistent, the island is located in front of the city of San Francisco. Alcatraz is a former prison, made famous by many gangster movies. Still today there is a very special atmosphere, especially if you are doing the night tour. After a short ferry ride that gives you a spectacular view of the bay, set out to discover all the secrets of Alcatraz. There are two options for this: take the tour on your own or take an audio guide, perfect for further immersing yourself in the disturbing atmosphere of the place. 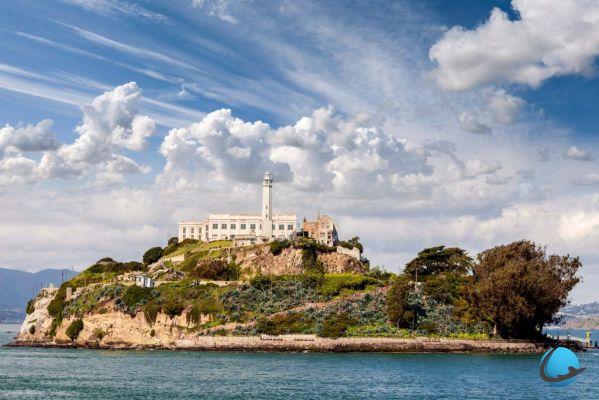 Take to the skies with a Cable-car

40… that's the number of hills that outline the city of San Francisco! If the more athletic will pace them on foot, the trams and the "Cable-cars" make it possible to climb these hills with less effort. The most beautiful line joins the district of Powell to that of Hyde via Chinatown. A must ! She climbs in particular Russian Hill, where the famous Lombard Street is located, a very steep, bendy street. From up there a magnificent view will be offered to you, encompassing the district of Telegraph Hill, the bay and, in the distance, the island of Alcatraz, the mythical prison. 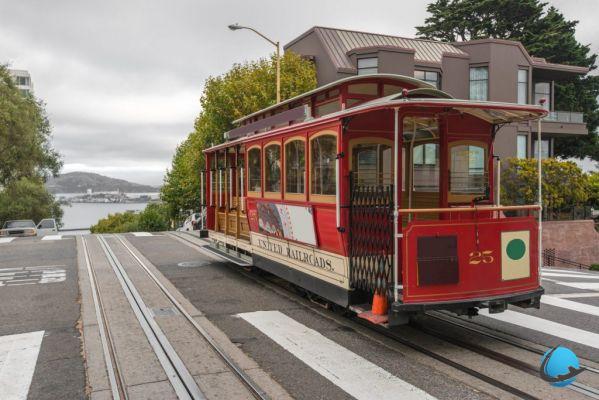 A cable car in San Francisco

Known as the most winding street in the world, Lombard Street stretches for one block, between Presidio and the Embarcadero. Its eight sharp bends were placed there to reduce the slope of the street a bit.. They are lined with multicolored flowers! Take out your camera: this place, in the heart of downtown San Francisco, is particularly photogenic ! Most visitors walk down Lombard Street but if you want to build up those calves, take the challenge of visiting it uphill! 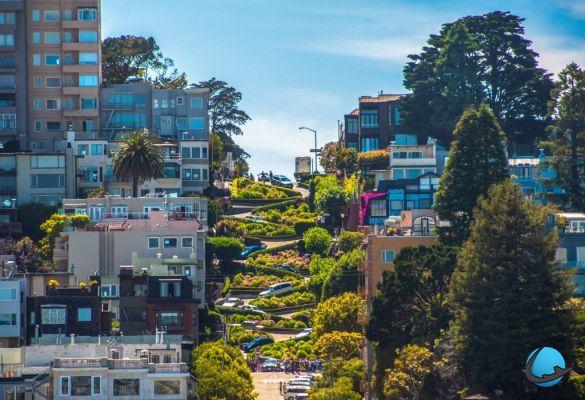 The Chinatown in the city of San Francisco is the largest outside of Asia, but also the oldest in North America. Located north of Union Square, right in the center, Chinatown attracts visitors with its typical temples, small shops and pharmacies of apothecaries. Go through the Dragon Gate, on Bush St. and enter a whole new universe: change of scenery guaranteed! After wandering around the neighborhood, sit down in a tea room or in a restaurant and savor these dishes from afar… An interesting break to experience during your exploration of San Francisco! 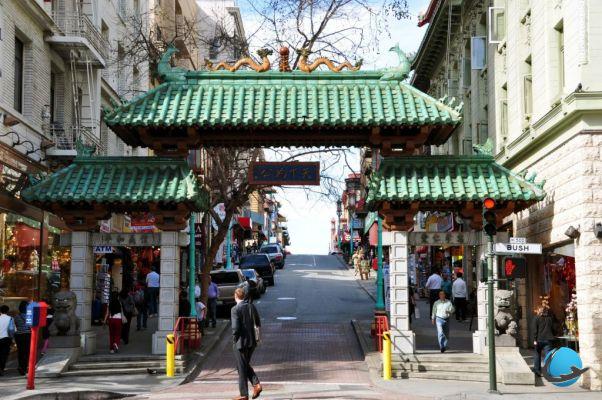 The Dragon's Gate in San Francisco

Located at the foot of the bridge of the same name, Golden Gate Park is a must-see in the city of San Francisco! A real green lung, it's bigger than Central Park in New York. If you need some fresh air, this is the perfect place for a picnic. You will find many thematic gardens there, including one dedicated to Japan which is exceptional. The park also has museums, including the stunning California Academy of Sciences. With its 10 km of cycle paths, it may be wise to rent bicycles to be able to explore every nook and cranny. If you had to do only part of it, do not miss the herds of buffalo that live there in semi-freedom. 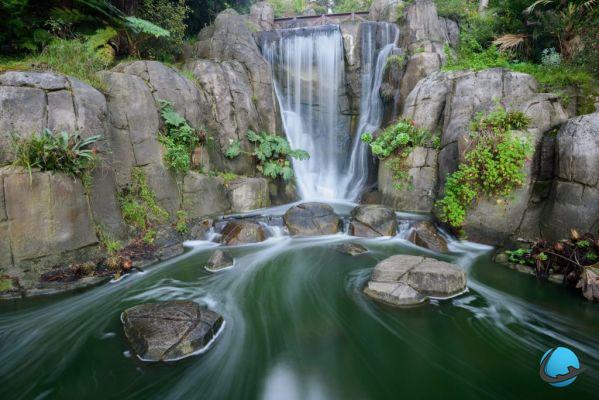 Follow in the footsteps of the hippies at Haight Ashbury

Cradle of “Summer of Love” and counter-culture, the baba cool district of Haight Ashbury will immerse you in the atmosphere of the 60s and 70s. It is here that the figures of the music scene of the time lived, from Janis Joplin to the Grateful Dead, who made their home in the city of San Francisco. Today Haight Ashbury is pleasant to visit: you will find there psychedelic stores, record stores to find nuggets or even restaurants where organic and local are in the spotlight. You can stroll through its streets lined with beautiful Victorian houses, often decorated with works of Street Art. 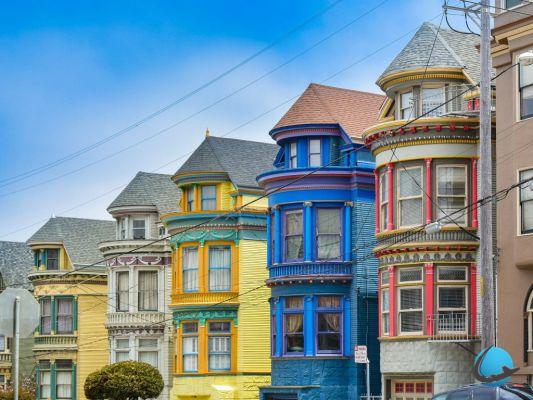 Symbols of the city of San Francisco, the Painted Ladies can be found not far from the Haight Ashbury district. This alignment of seven Victorian houses, between 710 and 720 Steiner Street, borders Alamo Square. Built at the end of the XNUMXth century, they are named so because of their different colors, allowing them to enhance their architectural details. Typical of an era, today they are one of the postcard images of San Francisco. 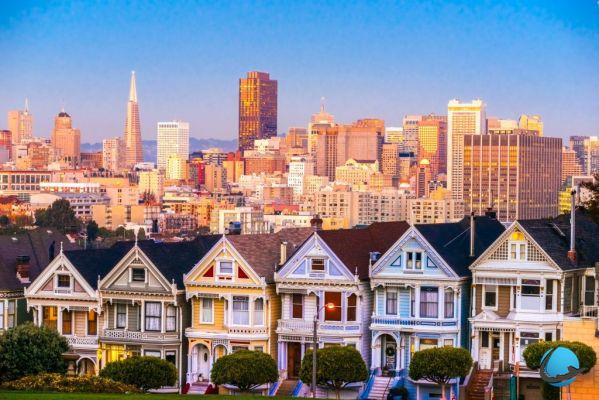 Driving through the south of the city, you will pass through "The Castro" district, true to its reputation as the birthplace of the gay community of San Francisco. The main thoroughfare, Castro Street, is very busy and shopping. It houses a magnificent cinema, the "Castro Theater" and the store of Harvey Milk, who became famous for having been the first openly gay politician in the United States. Castro Street also lists the best bars and nightclubs in San Francisco. In the evening, it is the place not to be missed under any circumstances to go out and party! 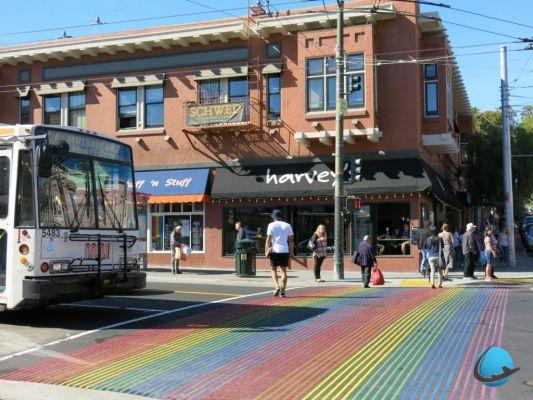 Castro Street and its rainbow crosswalks

Find a hotel or rental in San Francisco: 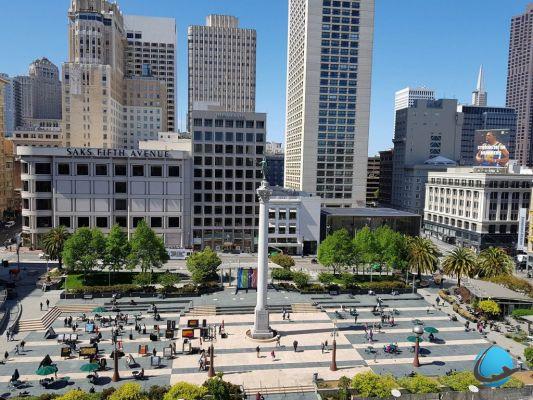 The must-sees of San Francisco… and after?

The city of San Francisco is one of the most charming in the USA and there are many possibilities for visits or walks. It can also be a perfect starting point for visiting national parks on a road trip. And why not go all the way to Los Angeles along the California coast? Ready for the adventure? Let's go for an unforgettable trip to the United States!

10 things to do while in Porto ❯

Snowzilla: the most beautiful photos of the snowstorm in the USA

What you need to know about the biometric passport