4 unusual hotels in the United States 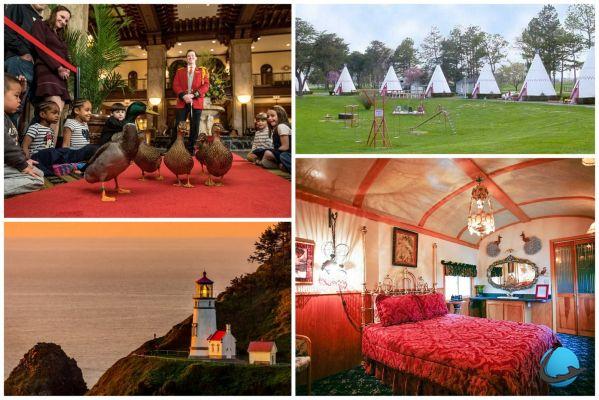 A hotel on a train

The title tells you everything there is to know about the special feature of this hotel. However, rest assured, this is not about sleeping on an uncomfortable sleeper train. The train is not moving and it has been redesigned to offer real rooms.


Aurora Express Bed & Breakfast is located in Alaska near the city of Fairbanks. Spending the night in this little corner of the typical Alaskan forest, in this train that one easily imagines blocked by a snowstorm, has a charm that cannot be explained.

Sleep among the American Indians

Despite the teepees, you are still in a territory belonging to the United States and we hope that you have thought about your ESTA because the change of scenery is complete! Each tipi actually hides a large comfortable tent.

Wigwam Village is a chain of hotels with seven establishments across the United States. Today there are only three left and we recommend the largest of them, Cave City, Kentucky.

The Peabody Hotel, located in Memphis, Tennessee, truly looks like a hotel like any other. You will find classic rooms spread over several floors with all the services one would expect from a hotel.

Its peculiarity, it is on the top floor where dozens of ducks live in a $ 200 palace which was specially fitted out for them by the manager in 000. Since then, every day at 1930 am and 11 pm, the ducks parade. in the lobby.

Sleep without turning off the light

If there is one type of building that is overflowing with charm and in which we have all dreamed of spending a night, it is a lighthouse. In addition to a breathtaking view of the sea, you can enjoy the sweet feeling of warmth brought to you by the sound of the raging elements when you are at the bottom of your bed.

Heceta Head Lighthouse, located in Oregon, is a former lighthouse that has been converted into a hotel. Rest assured, if you sleep there, you won't need to be on guard to prevent the boats from sinking. On the contrary, you will only have to enjoy the comfortable and nicely decorated rooms.

So which of these hotels tempts you the most?

5 cities you wouldn't have thought of visiting in Spain ❯

City Museum St Louis: the craziest playground in the world

10 things to do in Las Vegas, the gambling capital of the world

Add a comment from 4 unusual hotels in the United States