Do you really know the Statue of Liberty? 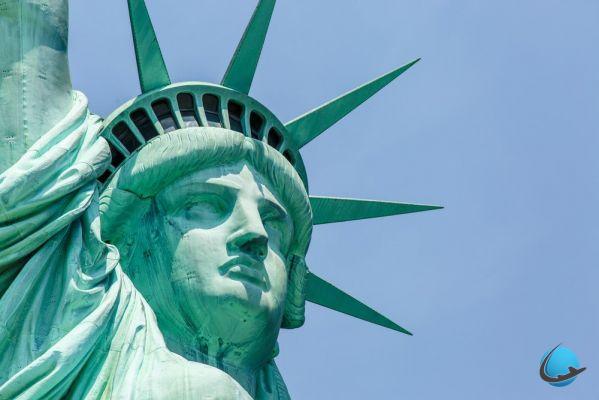 These things you might not know about the Statue of Liberty

The most famous monument in the United States, a true icon in New York, a symbol of freedom and emancipation in the face of oppression all over the world, the Statue of Liberty is known to all. Yet this internationally renowned goddess of metal and copper sometimes hides her game and does not reveal her secrets to all the mortals who visit her.
From your armchair, in a few clicks, we invite you to discover some anecdotes about this iron lady and to enter her privacy (with all due honor!).

The Statue of Liberty is a gift from France to USA in 1886 to celebrate 100 years of American independence ... 10 years late. Made in France by Frédéric-Auguste Bartholdi, what many Americans do not know (in 1986, only 2% knew), “Liberty enlightening the world”, was transported by boat in 356 pieces distributed in more than 200 cases.

A legal separation took place during her transport, since her right arm and her flame were separated by the Atlantic Ocean for some time, but she did not have any consequences.

Following the sabotage orchestrated in an ammunition depot in 1916 by German spies, the statue was damaged. The explosion - estimated to have a force of 5,5 on the Richter scale - blew up a hundred rivets and caused further damage to the torch which had to undergo a small facelift at 1,7 million dollars to be covered with gold. Yes, not everyone can afford a torch gilded with fine gold!

Even though she turns unvarnished, the one that worked like New York Harbor Entrance Lighthouse from 1886 to 1902, had a flagship career in the 7th art and toured with the greatest. No offense to Hollywood starlets, its weight (225 tons) and its disproportionate measurements (7,25 meters in size-girl), did not prevent it from becoming a monument of the cinema.

In 1917, Miss Liberty made silent with Charlie Chaplin (in The Emigrant), she replied to Alfred Hitchcock in 1942 in the Fifth Column and in 1997, still without any wrinkles, she appeared in the Fifth Element of Luc Besson.

Made for gadgets or reproductions, the Statue of Liberty can also boast of having replicas around the world, which is not the case with all stars.

A monument to visit

Finally, if the history of the Statue of Liberty is very rich, remember that it is also and above all one of the most visited monuments in New York. Off Manhattan, Liberty Island welcomes more than 4 million tourists each year.
Closed for a long time following the attacks of September 11, 2001, the interior of the statue can be visited, and in particular its crown accessible via a staircase of 354 steps. You will then benefit from a superb panoramic view of the bay and the skyline of New York and the southern tip of Manhattan. In 2016, it takes $ 28 to take advantage of it!

The 12 most beautiful photos of abandoned places in New York

USA tips: 7 recommendations to make the most of your trip

Learn all about Lombard Street, the most beautiful street in San Francisco!

Visiting New York: our practical advice for your stay!

Why go to Chicago? City-trip between earth and sky!

Add a comment from Do you really know the Statue of Liberty?