“goûThé” at the Grosvenor house in London

Afternoon tea tasting was invented by Anna, the seventh Duchess Bedford (1783-1857), one of Queen Victoria's ladies. The eating habits of his time consisted of a large breakfast, a light lunch, and a very late dinner. Every afternoon, therefore, the Duchess experienced a feeling of dejection.

One afternoon she instructed her servants to serve tea and cookies in her boudoir. The experience was so pleasant that Anna repeated it every afternoon thereafter. Soon others followed the Duchess's example, and within decades the tradition of "taking tea" in the afternoon was well established.

Grosvenor House is one of the largest privately owned houses located on London's Park lane in Mayfair. The house was home to the Grosvenor family – (better known as the Duke of Westminster) for over a century. Their home was the Millbank, but after the family had perfected their Mayfair land, they moved to Park Lane to build a house worthy of their wealth and their status and influence in the 19th century.

Afternoon tea will be held in the Park Room, which has great views over Hyde Park and has a live piano player to complement the traditional atmosphere.

You will sample a full "afternoon tea" tasting experience that is Anna's legacy, which includes a selection of sandwiches, plain buttermilk and raisin scones with Devonshire cream clotted, a Cornish strawberry jam, a selection of cream puffs and pastries, and a choice of tea. Go for a touch of luxury with a glass of French champagne on arrival – perfect for special occasions! 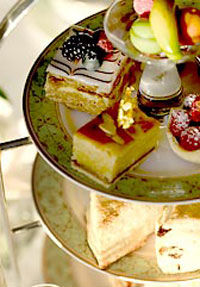 add a comment of “goûThé” at the Grosvenor house in London