Manchester's Hard Rock Cafe is the largest in the UK, holding regular concerts and special events. He also has a large collection of memorabilia including: a gold lamé jacket worn by Elvis, a guitar signed by Pearl Jam and a Natasha Bedingfield dress worn at the 2007 Grammy Awards. 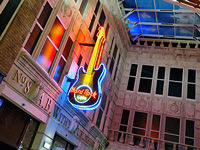 Located in central Manchester, this cafe will thrill your senses with authentic American food, generous drinks and an impressive collection of rock memorabilia. Pieces of tunes from legends the Beatles, the Rolling Stones and Little Richard adorn the walls of the cafe along with more contemporary items, including stage costumes worn by David Bowie and Elton John. The cafe also offers Manchester rock 'n' roll memorabilia featuring famous music greats such as Oasis, The Beatles, Nirvana, Eric Clapton and Prince.