Take a guided tour of downtown Foz do Iguaçu, and go to the Triple Border Monument, the meeting point of three countries in the Iguaçu Falls region: Brazil, Argentina and Paraguay . You'll learn about the culture and history of the Iguacuenses (the people of Foz de Iguaçu), and see local sites, including the mosque and the Buddhist temple of Foz do Iguaçu. 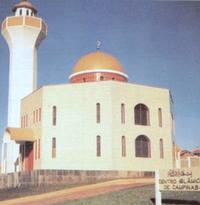 Your excursion begins with a guided tour of downtown Foz do Iguaçu, where you can stroll along Avenida Brasil (Brazil Avenue) and explore the various shops. You can also visit the Igreja Matriz, the Catholic Cathedral of Iguaçu Falls.

Next, head to the Triple Frontier Monument: it's where two rivers and three countries meet. Built right at the junction between the Paraná River and the Iguaçu River, this monument commemorates the borders of Brazil, Argentina and Paraguay. The stone and cement obelisks are painted blue, green and yellow, the national colors of the three countries.
After learning more about the history of this monument, visit the majestic Omar Ibn Al-Khattab Mosque. Built in 1983, this site is a very important place for the city of Foz do Iguaçu, which hosts the largest Islamic community in Brazil.
Finally, you will see the Buddhist temple of Foz do Iguaçu, and learn all about it, including the history of Buddhism and its teachings. End your excursion admiring the superb view of the center of the cities of Ciudad del Este and Foz do Iguaçu.

Chapada Diamantina – Treks in the mountains, canyons and waterfalls

We have been able to provide in 98% of times, the solutions that users were looking for when consulting our page.