A floating hotel opens its doors in Paris 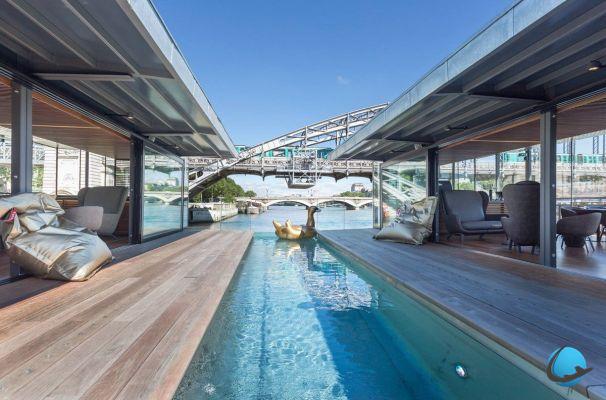 Le Off Paris Seine, the first floating hotel in France

The first French floating hotel, baptized Off Paris Seine and comprising 58 rooms including four suites, a restaurant area and a small swimming pool, has just opened its doors in Paris, quai Austerlitz. This is a “one-of-a-kind” project, mainly carried out by the real estate operator Novaxia. After the opening of an interactive hotel, this is a new and unusual accommodation offer in the capital.


A “unique” and “atypical” hotel

This “unique” and “atypical” four-star hotel, made up of a 650-ton barge combining wood, copper, zinc, leather and glass and resting on floats, is moored at a distance of 10 meters from the Austerlitz quay . It has 58 rooms of 15 m2 and 4 suites of 30 m2, overlooking the quay or the Seine. The prices displayed should range between 150 and 300 euros per night.

It also includes a catering area that can accommodate 80 people, a swimming pool 10 meters long by 2 meters wide and a quayside terrace of 400 m2. The catering areas are open to the public outside the establishment.

“This 100% French construction, which generated 200 jobs over 24 months, will allow the employment of 35 people on permanent contracts (10 people in the kitchen and the rest in the hotel) and participate in promoting the Paris destination, in a context particularly for the hotel industry at the moment, ”Christophe Sauvage, managing director and founder of Elengencia hotels, who is one of the funders of this“ somewhat crazy ”project, explained to the press.
The construction cost of the Off Paris Seine amounts to 11 million euros, including 4,5 million of equity. It is 54% funded by the Novaxia group, 20% by Bpifrance, 10% by Citysurfing, 6% by Elegancia Hotels, 9% by Business Angels and 1% by Euromodules.

A barge designed to last

Asked about the resistance of the floating hotel in the face of flooding from the Seine as Paris has recently known, the architect Gérard Ronzatti, replied that “the flood of early June 2016 made it possible to carry out a full-scale exercise and confirm that the barge is totally suitable for this type of event”.

“The idea was born from Gérard Ronzatti, architect and president of Seine Design, in early 2013, wishing to offer solutions to reinvent rivers. We then created a structure to develop a concept, and we took part in a call for projects from the Paris City Hall, presenting this floating hotel at Quai Austerlitz in Paris ”, recalled Christophe Gallineau, founding president of Citysurfing.

Soon other floating hotels in France?

“This is a project that has no precedent, for which we have invested on a 20-year concession”, underlined Joachim Azan, founding president of Novaxia, evoking the possibility that “this concept could be extended to d 'other cities in France or abroad ”.

A glimpse of Shanghai: a journey into the future ❯

5 exceptional Airbnb apartments for a trip to Paris

What are the most beautiful villages in Ardèche to visit?

Our essentials in Rennes: 10 places to see or do