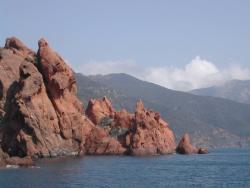 To the north of the Gulf of Porto and the chaotic forms of the Calanche de Piana, stretch the Gulf of Girolata and the Scandola nature reserve, sites classified as World Heritage by Unesco.

By discovering these intact and wild landscapes, we immediately understand why!

These places are accessible only by boat, but cruises are offered from Sagone, Cargèse or Porto. 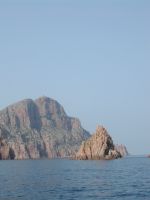 Since 1974, the maritime and terrestrial fauna and flora have been preserved by strict rules such as the prohibition of fishing, anchoring, diving, picking plants or camping.

Species threatened with extinction elsewhere have found refuge there, such as the osprey, a rare sea bird of prey whose nests hidden in the rocks can be seen.

Many scientific observations are carried out there to study fish, algae, corals or birds in a pristine environment. 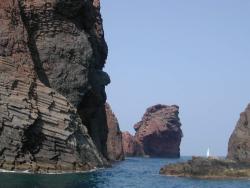 The Capo Rosso, which marks the southern limit of the reserve, is one of the highest maritime cliffs in France (more than 300 meters). It takes its name from the red granite of the rock.

The landscapes are breathtaking, with these strangely shaped rocks rising out of the deep blue sea.

Witnesses to an ancient volcanic eruption, the rhyolite organs are visible on the jagged rocks. Calcareous algae surround the stone with sidewalks that can be up to two meters wide! 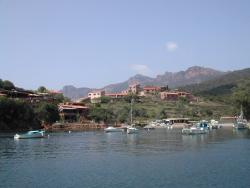 Dominated by a Genoese fort, the hamlet of Girolata, at the bottom of the gulf of the same name, is also only accessible by sea, or on foot via a mule track in the maquis and the mountains.

Out of season, there are no more than ten inhabitants.

In summer, many tourists come to admire the site, which makes you lose this feeling of being isolated at the end of the world, but does not prevent you from being dazzled by the beauty of the place.

Visit Briançon: What to do and where to sleep in Briançon?

Visit Blois: What to do and where to sleep?