On the trail of the Da Vinci Code in London

"A knight in London lies, whom a pope buries".

Langdon, Sophie and Teabing go to London to solve this riddle supposed to show them the way to the Holy Grail. Following in their footsteps is an excellent excuse to discover some of the most beautiful sites in the British capital. 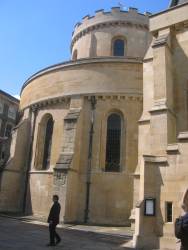 To begin, our heroes go to Temple Church, a small church hidden behind Fleet street, in the barristers quarter.

A stone's throw from the Strand and the hustle and bustle of the City, you reach Temple Church via a labyrinth of small pedestrian streets winding under porches, housing the British courts of justice.

The architecture of the building owes its originality to its circular nave which Dan Brown interprets as a sign of solar worship: "It is a curious building, pagan to the bone. […] A veritable Pantheon! It is a round church. The Templars refused to give him the plan for a Latin cross, to build a circular sanctuary, dedicated to the sun. A message to the Vatican without much subtlety. A bit as if they had transported Stonehenge to the very center of London ." 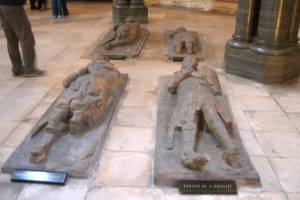 Inside, the same simplicity prevails with minimal decoration.

Observe on the ground the 10 recumbent knights: "The ten recumbent Templars rested peacefully, each on their stone base. All in full armour, with sword and shield. Langdon had the impression that an intruder had poured on them, during their sleep, still liquid plaster.The sculptures were quite damaged, but each of the knights stood out from the others – armor, positions of the arms and legs, facial features, coat of arms of the shields – many differences.
A knight in London lies, buried by a Pope.
Langdon shivered as he walked through the circular room. It was here that we had to look."

These stone bodies lying on the ground provide a strange impression as soon as one enters the small church. Another mystery of the Templars to protect their secret? 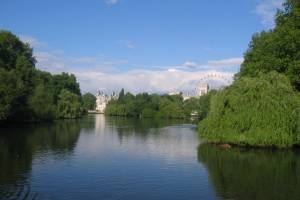 It is in Saint James's Park that the master poisons one of his overzealous servants.

Saint James is undoubtedly the most beautiful park in the capital, with its colorful flowerbeds, its many species of birds and its lake.

The view from the bridge across St James's park lake is stunning. On one side we see Buckingham palace, on the other Westminster and the London eye.

"Despite the mist still lingering over the large lawns, the park offered a magnificent view of the Houses of Parliament and Big Ben. Looking past the rolling hills, the duck pond and the delicate silhouettes of the weeping willows, the Master saw not far from there the two towers of the building which housed the tomb of the knight. "

These two towers are Westminster Abbey. This is where we go for the rest of our quest for the knight's tomb. 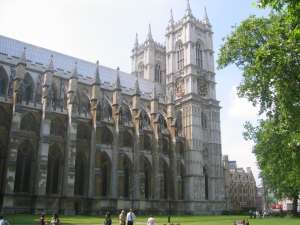 Langdon and Sophie go to Westminster Abbey to find the tomb of Sir Isaac Newton. The search for this tomb will be a real treasure hunt.

Indeed, the abbey "is a veritable maze of mausoleums, nooks, niches, galleries which command one another".

It is here that kings, queens and illustrious people are buried and where the greatest state and royal ceremonies have taken place.


All the sovereigns have been crowned there since William the Conqueror in 1066, as evidenced by the Coronation Chair (coronation throne) that can be seen in the abbey.

Once you have found Newton, you still have to solve the last riddle of the book: "Look for the sphere which should adorn his tomb".

Finally, take a walk in the other places of the capital mentioned in the book: the university of King's College (which does not have a department of research in theology!!), the Kensington gardens, the London headquarters of the opus dei in 5 short elm, and the famous London eye that scares Langdon so much.

"In the morning drizzle, the city loomed before them. Long dominated by Big Ben and Tower Bridge, the London skyline was now adorned with the Millennium Eye, a gigantic and ultra-modern Ferris wheel culminating at 170 meters in height, from which one enjoyed an extraordinary view of the city. Langdon had once considered going up there, but the "capsules" had reminded him of suffocating sarcophagi, and he had preferred to remain on solid ground to admire the spectacle from the stale banks of the Thames.”

Ready for the challenge?

Read the report on Da Vinci Code in Paris