Living between two worlds: Australian Aborigines between past and present

If you want to understand the situation of the Australian Aborigines, try to imagine that tomorrow extra-terrestrials come to visit the earth and that they are much more evolved than us.

Imagine that they take over our planet, pushing us to adopt their religion, their language and their way of life.

This is the best comparison to understand what happened to the Australian Aborigines, a little over two hundred years ago, when the "Whites" colonized the continent.

It was a clash of cultures from which Australia has still not recovered. The Aborigines speak of this period with the term invasion.

When Europeans arrived in Australia at the end of the XNUMXth century, they found a vast inhospitable region inhabited by humans who seemed to have emerged from prehistoric times.

No towns, no trace of agriculture, only bands of nomads carrying weapons of stone and wood.

Moreover, the English declared the island "Terra nullius", the land that belongs to no one.

All Aboriginal culture is based on spirituality, which covers all aspects of life.

It can be said that if the Aborigines, since their arrival in Australia 70 years ago, have not made technological progress, it is on the level of spirituality that their evolution has taken place.

Incomprehensible for Europeans in the midst of the industrial revolution! Thus, no treaty was ever signed with the Aborigines, since no right of ownership was recognized to them.

After a few years of contact steeped in reciprocal curiosity, the situation escalated. The settlers appropriated the land and thus the traditional hunting and gathering territories.

They imported cattle and built cities. The Aborigines were then considered harmful, and often shot, because they often attacked livestock.

The last "official" massacre took place in 1928, near Alice Springs.

In the twentieth century, Australia practiced a policy known as assimilation, with the aim of integrating Aborigines into white society.

Nomads were forcibly settled around missions, mixed-race children removed from their families and placed in white institutions.

It was not until 1967 that a referendum granted the status of Australian citizens to Aborigines!

In 1988, Eddie Mabo, a Torres Strait native, filed a lengthy lawsuit with the government demanding that the concept of Terra nullius be abandoned.

This resulted in the Native Title Act in 1992 which allowed Aboriginal people to claim rights to their traditional lands. 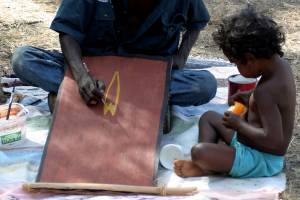 Today, the visitor to Australia very often only sees two aspects of the Aboriginal reality: on the one hand the culture celebrated by the arts (but remember that it was the Whites who pushed the Aborigines to paint on canvas!) and cultural tourism often organized by the clans themselves and on the other hand the violent misery of Aborigines in the street.

Of course, between these extremes are very diverse situations, but the fact is that the average life expectancy of an Aboriginal in Australia is 20 years less than that of a non-Aboriginal and that the death rates for cause of obesity, alcoholism or suicide are alarming.

In many cases, a complex culture, over 40 years old, dies along with the last knowledge-holders, the Elders whose alcoholic children are unable to carry on the torch.

Another problem: racism, which is still endemic in many parts of Australia and which has eaten away at the self-confidence of Aborigines for decades.

The rise of international tourism has rekindled the flame of Aboriginal culture: if tourists travel thousands of kilometers to take an interest in their culture, say many Aborigines, it is because it deserves to be preserved.

In a country where for two hundred years, Aborigines were considered inferior beings, the pride of being a "blackfella" is experiencing a rebirth today, still timid but very present.

There's still much to do. As the Aboriginal singer Archie Roach says in one of his songs “What we need is time”, the time to find your place between two worlds that everything opposes.


A few tips on Aboriginal etiquette 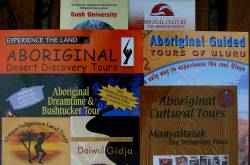 Be courteous and respectful, especially to older people.

Avoid asking too many questions, because among the Aborigines, we learn by watching and listening.

Don't be surprised by the lack of eye contact: looking someone in the eye is not done, except to provoke them!

The words "blackfellas" and "whitefellas" to refer respectively to Aborigines and whites are widely used and politically correct.

Aborigines do not have the same notion of time at all as we do, their time is cyclical while ours is linear: if you give an appointment to an Aborigine, he may very well not come, don't be offended not ! He might be here tomorrow!

Finally, if an Aborigine calls you “sister” or “brother” (my sister/my brother), take that as a compliment!

Anthropological documentation on the Aborigines (part of the site in French)

Sailing for the America's Cup in Sydney Harbor ❯

add a comment of Living between two worlds: Australian Aborigines between past and present