"English gastronomy", contradiction in terms you say? I can already see it in your skeptical face… But no, let's not be so bad-mouthed with regard to our neighbors across the Channel!

If English gastronomy has long been the subject of a bad reputation on the part of its French hosts, the reality is currently quite different. It would even seem that it has almost overtaken metropolitan culinary art, although previously our British friends did not seem to be interested in such “trivialities”!

So, on the menu we have a hearty breakfast in the morning where you can choose between porridge, buttered toast with orange marmalade or the usual cereals and orange juice. All accompanied by the usual coffee or milk tea.

At lunch, we will taste the typical traditional London dish: the famous roast beef. It is usually accompanied by hash browns, vegetables, sauces and sometimes baked pancake batters. You'll see, it's delicious!

But you can also opt for the famous Fish and Chips, the favorite dish of the English. The latter, a fried fish accompanied by chips and straddled in a cone or in paper, is also tasty and is ideal for people in a hurry.

To accompany these meals, the British will certainly offer you to taste cider or a mug of these famous beers: Lager and Ale. Whatever the choice, it will be wise! For dessert, you can enjoy the flavor of apple pie, cheesecake or traditional pudding.

For small snacks, you will have nothing to fear because Tea Time, this famous British tradition has no specific time, there are at least two a day. Especially since with tea and or coffee, you will enjoy pancakes.

And if after all this, you are not yet satisfied then you are really difficult! 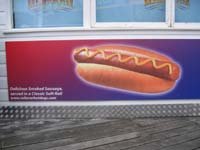 First breach in the most entrenched stereotypes: In 2005, the famous American culinary magazine Gourmet awarded the prize for the city where you eat the best in… London!

Hear by that that we find there some of the best restaurants in the world!

I hear you from here objecting that this concerns cuisine from all over the world and not strictly speaking English cuisine, which only has ultra-boiled vegetables, stale pudding and greasy “fish and chips” to offer… 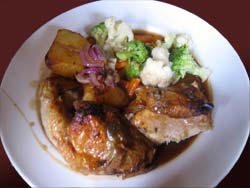 So you will be surprised to learn that English food can be excellent.

You will be seduced by the "pub food", as much by the dishes served as by the atmosphere. The English are used to going there every Sunday at noon for the traditional “Sunday Roast”.

Very pleasant in the "country pubs", these pubs lost in the middle of nowhere in the English countryside and which offer a warm welcome in front of the eternal fire. 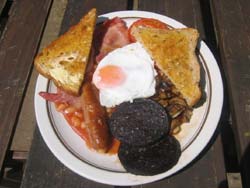 
Then there is the famous English Breakfast that you absolutely have to try.

It generally consists of eggs, bacon, beans, mushrooms, tomatoes, toast and black pudding (a kind of black pudding in the shape of a pancake mixed with seeds…). 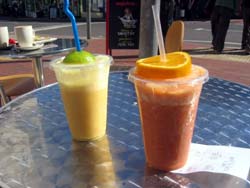 In terms of drinks, pints of beer follow one another at breakneck speed among our neighbors across the Channel. Many pubs buy their beer from local breweries.

Also try the smoothies; those delicious fruit cocktails mixed before your eyes that are found all over England. There is no need for me to tell you about tea.

You can imagine that the English drink it all day. If you want to drink it without milk (as well as coffee). Specify it very clearly because it will be served to you automatically with it!