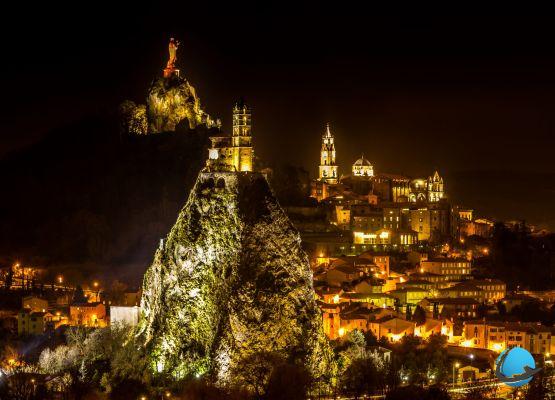 Are you planning to spend a few days in Puy-en-Velay? Prefecture of Haute-Loire, Le Puy-en-Velay is a dynamic city, steeped in history and rich in architectural treasures. Follow our guide and discover this historic city in Auvergne-Rhône-Alpes.

The emblematic monuments of Puy-en-Velay

Notre-Dame du Puy-en-Velay cathedral is a major construction of Christian Romanesque art. Listed as a UNESCO World Heritage Site, like the whole city, it is one of the emblematic monuments of the city. It was erected between the 11th and 13th centuries. To access it, you will have to climb the many steps of its imposing staircase. Visit the cloister, admire the nave and the various relics housed within the Notre-Dame du Puy-en-Velay cathedral, including the famous Black Madonna.

What are the most beautiful villages in Auvergne? Here are our 11 favorites!

Festival of Lights: when Lyon shines with 1000 lights

How to have a good holiday in the Alps in winter?

What to do during a romantic weekend in Paris?

9 getaways to do around Nantes