Blois, interior visit of the castle 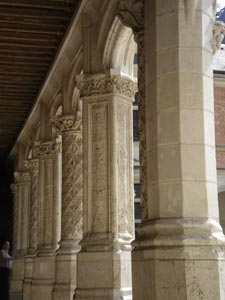 The visit of the interior of the castle of Blois is absolutely essential if you are passing through the city!

Although the royal apartments of Blais are not as well preserved as those of Cheverny, don't just take a look, take the time to let yourself be penetrated by this chronology rich in characters and intrigues that pass before your eyes. as you wander through this string of rooms.

The "castle" of Blois (finally, the building that stood at the time on the site of the contemporary castle) of Blois became a royal residence - damaging the pawn to Amboise under Louis XII in 1498.

Since then, the court continues to roam here and there and has Blois as its home port in a relatively stable way over the centuries, which allowed the castle to accumulate beautiful decorative and architectural treasures.

That said, the building was almost destroyed by Louis XVI, it was then transformed into barracks - until 1845. It is the magnificent work of the architect Félix Duban, under the aegis of the Ministry of Heritage in the person of Prosper Mérimée (whom we know better as a writer) that we owe the restoration of the interior rooms (in the 19th century). 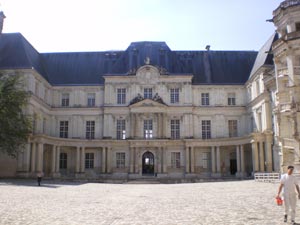 For your information, note that no royal furniture from the XNUMXth century – let alone earlier – has been preserved, so the pieces you will see did not belong to the kings of the time.

Similarly, the wallpapers are not original but the patterns tend to be similar. As for the floor, it has been redone in each room for the sake of authenticity.


The visit of the interior is either free or guided. It is of course preferable to opt for the second option.

Start with a visit to the splendid Salle des Etats, which served as a courtroom under the Counts of Blois, then a gathering place for the Estates General twice under Henry III.

The collections of the lapidary museum also exhibited in the medieval castle are worth the detour mainly for the gargoyles (but apart from that, nothing exceptional).

It is in this wing that the royal apartments are located, which saw the order of François 1er, Catherine de Médicis, François II and Marie Stuart and finally Gaston d'Orléans.

What catches the eye the most is the richness of the French ceilings (like those you can see in Cheverny which vary from room to room. The fireplaces are far from austere either…

The latter, also known as the "poison cabinet", is the only original study (except for the floor and the ceiling), in other words a pearl of French heritage.

Go back up the spiral staircase, and here you are in the new cabinet room, sparsely decorated, remaining a witness to the state of the castle after the “barracks” stage.


Glad that the military graffiti could be erased! The paintings in the Guise room will allow you to follow the assassination of the Duke of Guise image by image before entering the room where the crime is said to have been committed (by 8 men under the orders of Henri III), the king's bedroom.

Don't forget that in the time of kings, beds were not used for sleeping but for receiving guests, and above all for impressing them!

The guided tour lasts one hour. Count another hour for the visit of the exterior, the chapel, the view of the Loire, etc. A sound and light show is offered in the evening from the beginning of April to the end of September.

add a comment of Blois, interior visit of the castle