Bonifacio is an extraordinary site, and that's an understatement! From the historical point of view, it was the port and the refuge of old boats before becoming today, this beautiful port of mooring of beautiful pleasure boats on an expanse of more than a thousand meters.

The city was often besieged and demolished hence the presence of fortresses which were successively erected.

Located on a rocky point of white limestone, in the south of Corsica, Bonifacio rises in all its beauty over a hundred meters, offering a marvelous spectacle for the eyes from afar but which can make you dizzy.

The city is divided into two parts, we distinguish the old fortified city which shelters the inhabitants in its upper district on one side and the marine port located in the lower district.

Sites not to be missed: If you are spending your holidays in Bonifacio, don't forget to take a look at the Staircase of the King of Aragon. A grand staircase that includes all in all, 187 steps leading directly to the sea.

Also visit the Gouvernail and its underground passages. It is a tunnel of 168 steps built during the Second World War and which leads to the Gouvernail de la Corse.

Do honor to the beautiful churches of the city: the Saint Dominique Church and the Sainte Marie Majeure Church. Also visit the marine cemetery which is located at Bosco and finally the Bastion of the standard, these old fortifications which are on the port. 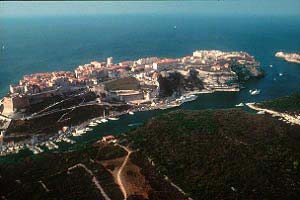 Located on the same parallel as Rome or Barcelona, ​​the port (where you may meet this Bonifacien who served as a model for one of the main characters in "Asterix in Corsica" …) is the southernmost of the island.

Dominating the Bouches de Bonifacio from more than 60 m high, the white cliffs streaked by erosion are cut over a hundred meters to give access to the most beautiful cove in the Mediterranean. 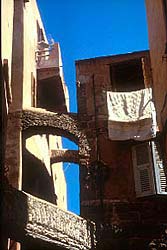 One could almost imagine a landscape of fjords under the Mediterranean sun. Between the blue of the sky and the blue of the sea, the natural port – full of life and colors – sinks more than 1.500 m inland. 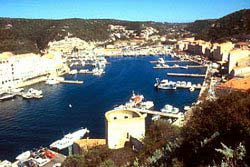 Supervising the string of islets that dot the maritime passage between Corsica and Sardinia, the old town deserves an "in-depth" discovery.

Proudly erected on its rocky peak, protected by its Genoese ramparts, it hides a few buildings that are worth seeing: the St Dominique church (one of the rare Gothic buildings in Corsica), the surprising Ste Marie Majeure church (the only island to have an outside loggia), the Rue des Deux Empereurs where by chance Charles-Quint and Bonaparte stayed in houses facing each other, the Rue du Palais with its spectacular flying buttresses, the Porte de Gênes which faces at the sea, …


Not to mention settling down to the only cabaret (the "Fa Diese") which still favors authentic Corsican music.

1: Seen from the sky, Bonifacio appears even more like the true Corsican sentinel

2: With its spectacular flying buttresses that play with shapes and light, Rue du Palais is worth a detour

3: The port of Bonifacio, colorful and atmospheric, is nestled in the heart of a superb natural environment