Today, second article on Sicily, where I did a week-long road trip a few weeks ago. First stage of my trip, Palermo, this capital of Sicily is also the largest city with nearly a million inhabitants. It is located on the north coast of the island. Let's start our tour of Palermo. 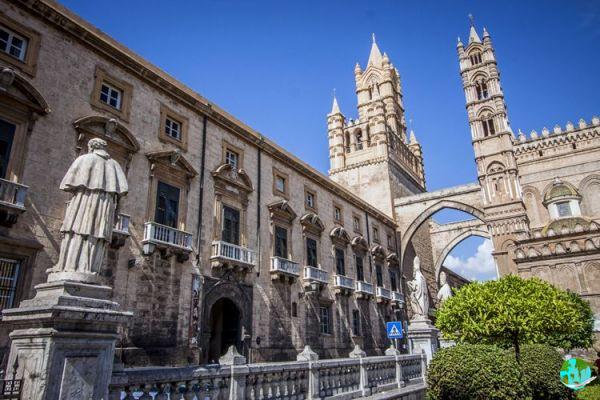 What to visit in Palermo?

Our city tour begins with the Norman Palace. Located in the heart of Palermo, this imposing building, near the Piazza Independenza, once served as a Punic fortress, a Roman fort, a castle and then the residence of the Norman kings from which it takes its name. This palace can be visited, almost entirely, as well as the Palatine chapel, included in the body of the building. You will find magnificent mosaics and a charming inner courtyard.

[tabs ]
[tab title=”Practical Info”]The Norman Palace can be visited every day, however, on certain days access to the royal apartments is prohibited due to parliamentary activity. The chapel is closed on public holidays. The visit will cost you 8,50 euros.[/tab]
[/ Tabs] 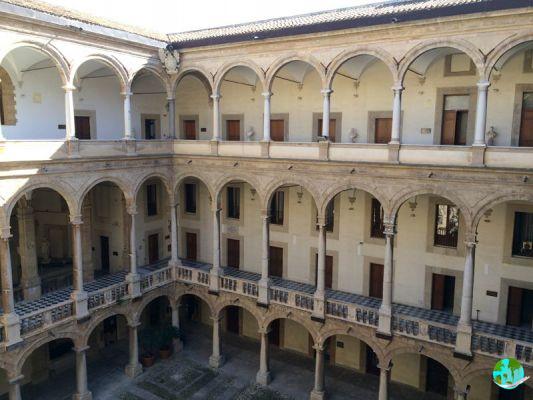 This church was built by the Normans in the 1136th century. However, it is clearly inspired by Byzantine and Arab architecture. It was even used as a mosque before being re-consecrated to Catholic worship in XNUMX. This monastery, of which this church is a part, is a calm and peaceful place in the heart of the historic center of Palermo. These red domes make it original. 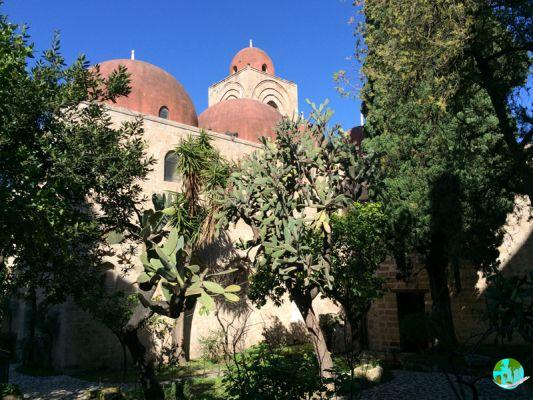 The Church of San Domenico in Palermo is a church of baroque architecture built between 1458 and 1480. Located in the center of Palermo, it is its baroque facade that makes it original. 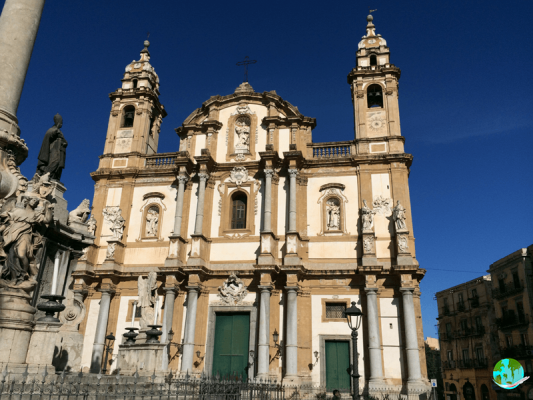 The piazza vigliena or quattro canti (the 4 fountains), is an intersection of two streets, via Maqueda and corso Vittorio Emmanuele. This crossroads has the particularity of delimiting four ancient parts of Palermo. Each of the four facades are decorated with fountains and statues. Place of obligatory passage during your visit to Palermo, you will find there many horse-drawn carriages which will offer you to visit the city in a more original way.

The San Nicolo all'Albergheria tower, located in the Albergheria district, was built at the time of the Normans in the 2,50th century. Used as a watchtower, this tower will give you one of the best views over the city of Palermo. During our visit to Palermo this tower was closed for work. That day, we had the chance to meet the priest of the Saint Nicolas church with whom we could talk. Seeing our interest in the tower, he was kind enough to give us a guided tour of his church, but also of the catacombs under it. He ended up letting us climb to the top of the tower and it was after climbing many steps that we arrived on the roof of the tower, offering us an impressive view of the city. This tower is an unmissable stop on your visit to Palermo. Note that climbing the tower costs XNUMX euros.

Initially built to be a monastery, this cathedral was built in 1172 under William II. Like the Church of Saint John of the Hermits, and like many other monuments in Palermo, this cathedral is inspired by the Byzantine Arab-Norman style. These three civilizations having left their marks on Sicily and the style of its buildings. This imposing cathedral has equally impressive dimensions with its 102 meters long, 40 wide and 35 high. The interior is rich in mosaic and gilding. 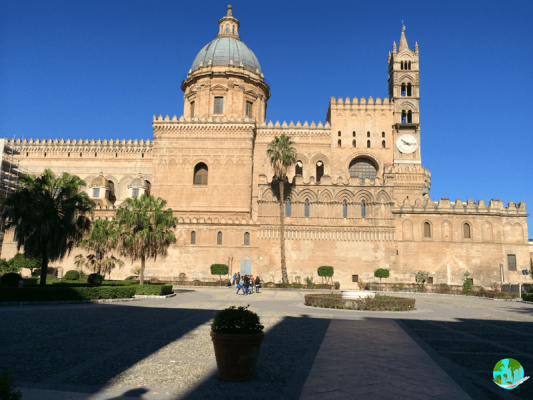 Located right next to piazza Vigliena (square of the four fountains), piazza Pretoria is a charming square, facing the town hall, made up of a masterful fountain moved from Florence, the city for which it was built, to Palermo in 1575 it is made up of many statues of marine deities. It is also called Fontana delle Vergogne, or Fountain of Shame because of the nudity of its statues. 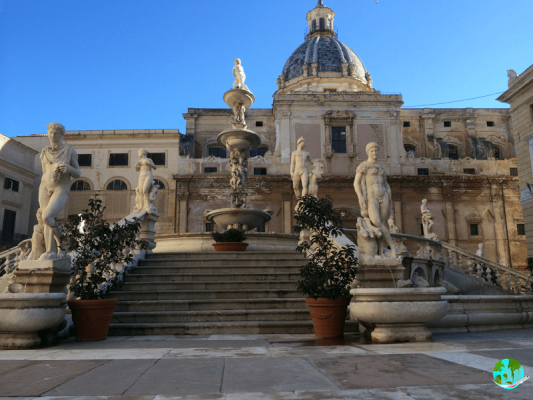 One of the important places in Palermo that we unfortunately could not visit, the catacombs of Palermo. Unique places where nearly 8 mummies are stored. These catacombs are visible to the public. You will be able to see these bodies, some very well preserved, even if the influx of visitors deteriorates the conditions of conservation of these mummies. 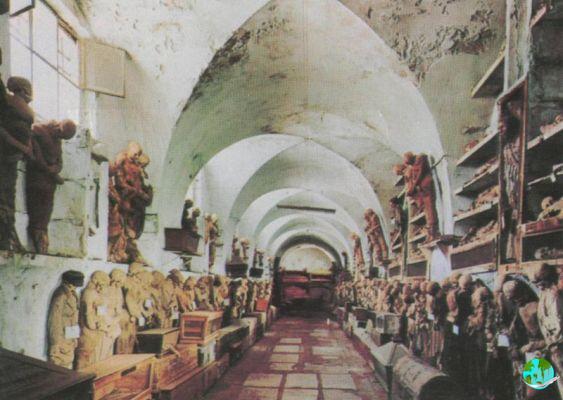 The Massimo Theater is an impressive building in the heart of Palermo. This theatre, built in 1875, has been completely renovated after nearly 20 years of work. It is one of the largest theaters in Europe, it can accommodate 1400 people. 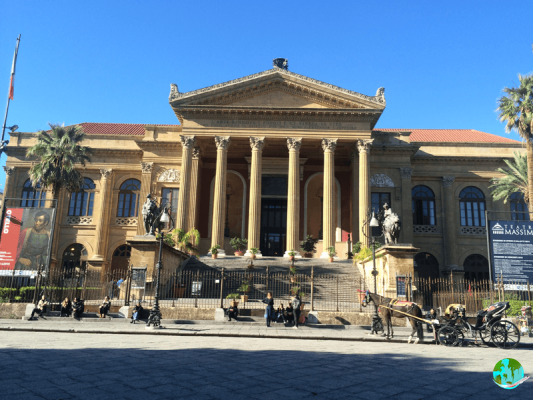 To get to Palermo the easiest way is, of course, by plane. Sicily has 3 airports. Palermo, the closest to the city, Catania is the farthest and Trapani, not far from Palermo, about 1 hour 40 minutes by road. This airport will allow you to find a cheap flight to reach Sicily. You can, for example, use the Degriff site.

Sicily # 4: Discover the Roman villa of the Casale in Piazza Armerina ❯

Ascent of Vulcano in the Aeolian Islands

Discover Ischia, the most beautiful island in Europe

Visit Messina: What to do in and around Messina? Where to sleep in Messina?