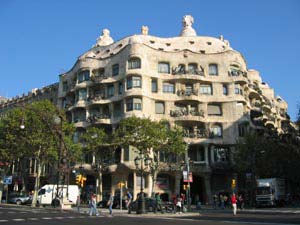 Facade of the Quarry of Gaudi

Commissioned by businessman Pere Mila and his wife Roser Seguimon, it was built between 1906 and 1912.

The entrance door, interlaced iron and glass, seems to imitate a spider's web.

The interior courtyard, the terraces and the windows create an unreal and ethereal world.

The interior of Casa Mila never ceased to amaze me, the astonishment is even greater when you reach the roof. Anthropomorphic sculptures populate the terraces and transform the city which stretches as far as the eye can see. 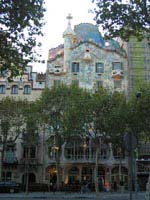 Antonio Gaudi renovated and transformed this residence on behalf of the industrialist Josep Batllo Casanovas between 1904 and 1907.

The facade, colorful and sinuous, is covered with ceramic discs and glass pieces.

The interior of the house offers a harmonious architecture. The aesthetic concern is present in every detail: the fireplace looks like a mushroom and the stairs imitate the meanders of a river.

It's still the top of the house that surprises me, a sculpture in the shape of a bulb is surmounted by a cross and the chimneys are covered with multicolored ceramics. 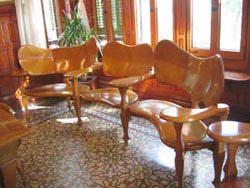 Close to the Sagrada Familia, the Casa Battlo and La Pedrera are unmissable for anyone who wants to know and understand Gaudi's work.

Another interesting visit, which can be combined with the discovery of Parc Guell, is Gaudi's Casa-Museu.


The house, located in the heart of Parc Guell, is decorated and furnished by the architect. I particularly liked the collections of armchairs and tables.

Inspired by plant forms, these objects create a harmonious and relaxing atmosphere.

Closed from 14 p.m. if there is a special activity in the house

Rates Groups of more than 10 people

add a comment from Three houses to discover Gaudi's Barcelona