Combine a visit to the Alhambra, Granada's most popular historical site, with a pampering afternoon at the city's Arab baths: the Al Andalus Hammam. Start with a morning tour with skip-the-line access to the Alhambra, a UNESCO World Heritage Site, including highlights like the Alcazaba Fortress and Generalife Gardens, then relax at your leisure in the thermal baths of the Arab baths. You can even include a massage! 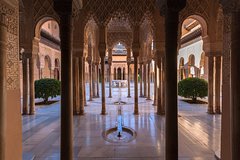 Depart your Granada hotel aboard an air-conditioned coach and travel to the city's most famous monument, the Alhambra, for a 2-hour tour. The characteristic pink palace complex dominates Granada and overlooks the city from its promontory on the Sabika hill. Built in the 30th century during the reign of the Nasrid dynasty, the site was originally a fortress, to which grand buildings, courtyards and lavish gardens were added by successive rulers.
Now listed as a UNESCO World Heritage Site, the Alhambra is a fascinating place to discover with its endless architectural marvels waiting for you around every corner. After avoiding the long lines, begin the tour with your guide. Admire the Moorish architecture of the Alcazaba fortress and the three Nasrid palaces: Mexuar, Serello and Harem. Head inside and marvel at intricate Islamic artwork before visiting the Palace of Charles V, designed by legendary Spanish architect Pedro Machua.
Visit the Generalife Gardens of the Alhambra and imagine the Moorish kings of yore relaxing amidst fountains and elaborate colored parterres. Often translated as "garden of paradise", this beautiful place is ideal for the leisurely stroll you will take with your guide.
After your morning tour of the Alhambra, your guide will drop you off in central Granada or at your hotel so you can enjoy a few hours of free time for lunch (own expense). At the appointed time, make your own way to the Al Andalus hammam in Granada for a moment of well-being. Spend the afternoon relaxing in the hammam's seven pools, all beautifully decorated with dazzling mosaics. The temperature varies in each pool, so you can bask in the warm water and wake up to a swim in the freezing water. For an afternoon of absolute pampering, upgrade to include a traditional Arabic massage with natural aromatherapy oils.

add a comment of Skip the Line: Alhambra and Granada Hammam Tour