Explore the Alhambra and the Generalife Gardens on this 3-hour skip-the-line walking tour, accompanied by a professional local guide. With hotel pickup and drop-off in central Granada included, this tour guarantees you a ticket to the Alhambra (a limited number of tickets are allocated each day) and allows you to visit the Alhambra, a UNESCO World Heritage Site, without hassle. Unesco World Heritage. Admire the superb Moorish architecture of the Nasrid palaces and imagine the sumptuous life of the sultans who inhabited the place. 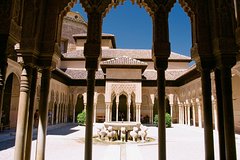 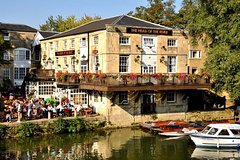 Your friendly local guide will pick you up by air-conditioned minivan from your Granada hotel, then take you to Sabika Hill to visit its most spectacular monument: the Alhambra. Perched on the hill overlooking the city, the incredible palace complex was built as a fortress in the early XNUMXth century. Many Spanish leaders lived in the Alhambra and the fortress grew to become a medina (small town on the hill) with numerous palaces and sumptuous gardens.
Skip the long lines with your priority access ticket and stroll inside with your guide, hearing the history of this fascinating site. Now listed as a UNESCO World Heritage Site, the Alhambra is a treasure of Moorish architecture. You will see many of its wonders as you browse its highlights. Admire the decadent halls inside the Nasrid Palace, like the Hall of the Ambassadors (Salón de los Embajadores) and Courtyard of the Myrtles (Patio de los Arrayanes) and marvel at the architecture of Pedro Machuca at the Palace of Charles V .
Enter the Hall of Abencerrajes to admire its star-vaulted ceiling and learn the story of the massacre that took place here during a XNUMXth-century banquet. You will also see the Royal Baths of the Alhambra; simply decorated, devoid of ornament, in keeping with the belief that bathing was a religious obligation and not a luxury.
After exploring the palaces, head to the Generalife Gardens to see where the Moorish sultans and kings of old rested. With abundant flora and numerous water jets, the gardens also include two other interior courtyards that you can admire: the Patio de la Acequia and the Patio de la Sultana.
At the end of your 2-hour Alhambra tour, your guide will drop you back at your Granada hotel by minivan.

add a comment of Skip the Line: Alhambra and Generalife Gardens Half-Day Tour