Photo safari in Kenya in 30 shots 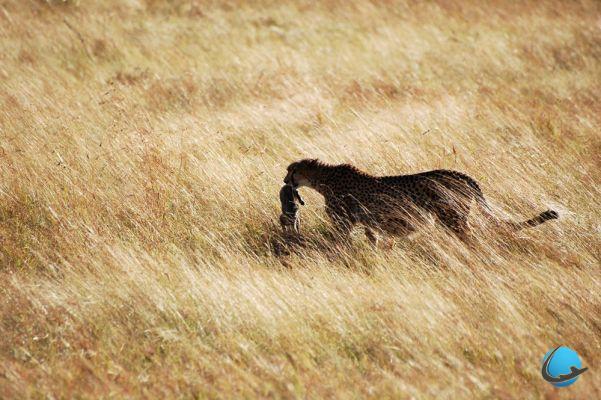 The Masai Mara National Reserve in Kenya is part of the geographic continuity of the Serengeti National Park in Tanzania. As the name suggests, these are the lands of the famous Maasai tribe. Made up of landscapes typical of the savannah plains, it is a paradise for photographing elephants, lions, giraffes and other animals. It is also in this park with its fragile balance that you will be able to observe the transhumance of zebras and wildebeest which gather by the thousands and in herds to cross together the perilous Mara river where crocodiles, lions and cheetahs wait patiently ... 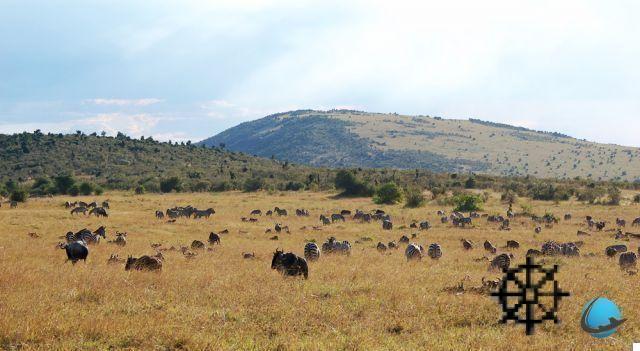 The zebra is an enigmatic animal due to its stripes which make it very visible in the savannah unlike other animals. A sign of social distinction, a repellent against parasites such as the Tsé-Tsé fly or collective camouflage to impress predators who believe they see one and the same mass when the herd gathers. 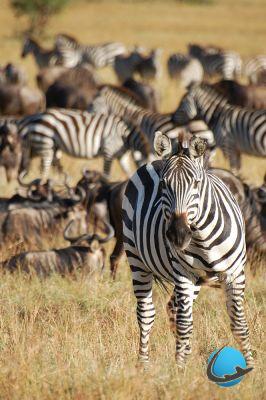 Lioness and herd of wildebeest

Lioness attacking a herd of Wildebeest in the Masai Mara National Reserve. 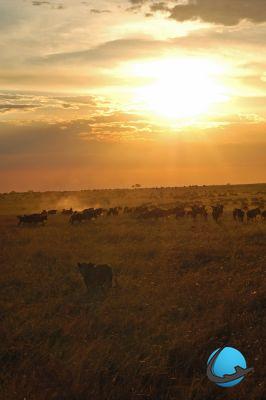 Giraffes in the Masai Mara National Reserve in southwestern Kenya. 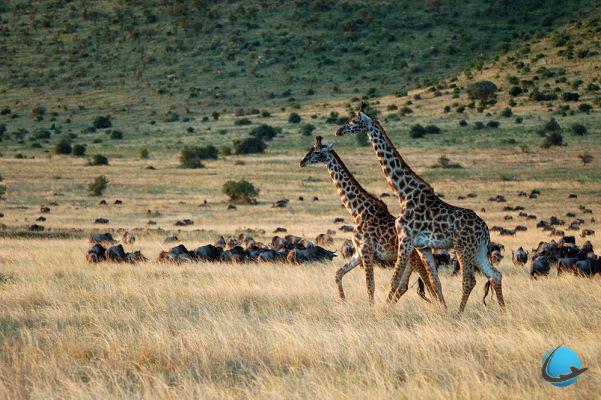 Lone lion crossing the territory of a rival in the Masai Mara National Reserve. Not very lively on the hunt and often on an empty stomach, solitary lions are forced to challenge rivals or other predators in order to steal their carrion. 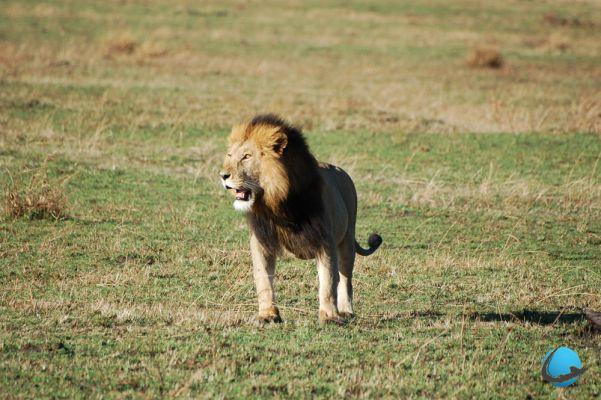 Cheetah bringing back its prey

The cheetah's performance speaks for itself: capable of covering eight meters in a single stride and four strides per second (i.e. a 100 meters in 3,125 seconds!), It is the fastest quadruped in the world and inevitably the one of the most efficient predators. 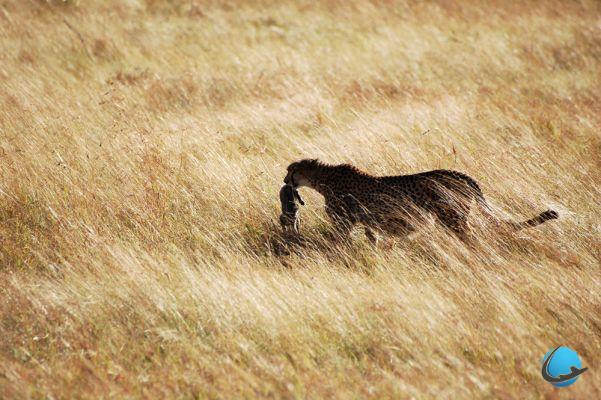 Giraffe and herd of wildebeest

Common scene during a safari in Kenya in the Masai Mara Reserve: giraffe and herd of wildebeest mingle without fear. Indeed, both animals are herbivores. One feeds on tree leaves and the other on the grass of the vast plains of the savannah. 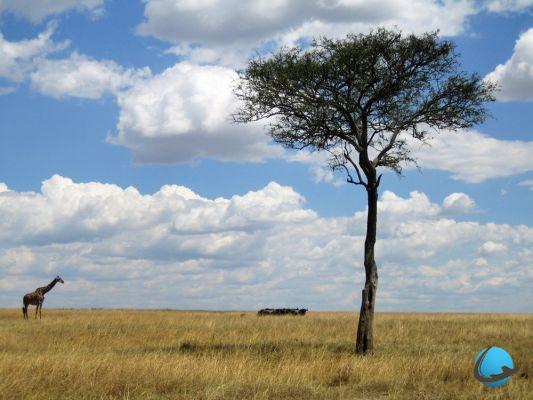 The vultures are stationed at the treetops to watch for dead carrion in the distance thanks to their overpowering view. 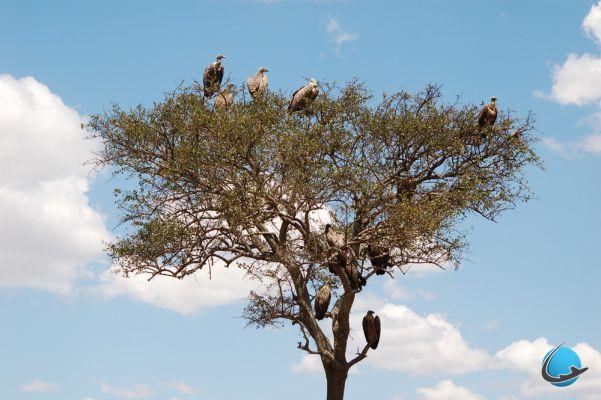 The ostriches present in Kenya are said to be “red stroke”. They can reach over 2,20 m and exceed 120 kilos! Measurements that prevent this bird from flying ... 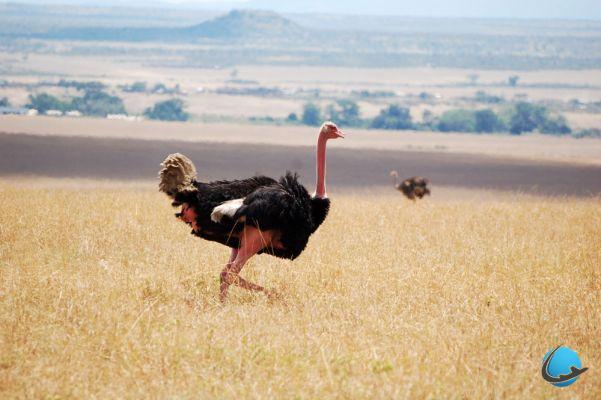 Antelope in the Masai Mara reserve

Antelopes are the favorite prey of cheetahs who love their meat. But by dint of being chased, the antelopes have been able to develop their defense based on overpowered sprints, tight turns and incidentally kicking back legs that can knock out any animal squeezing them too closely ... 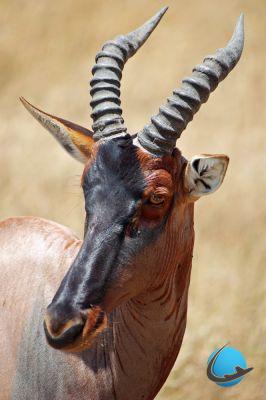 Hippos in the Mara

Hippos in the Mara, the river that crosses the Masai Mara National Reserve. These massive animals spend their day in the water to protect themselves from the sun. 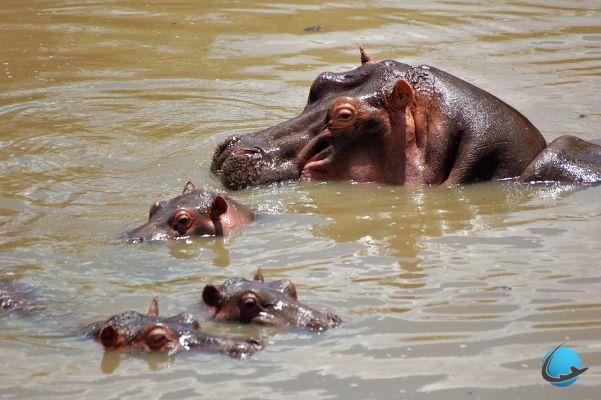 Wildebeest and zebra in transhumance

The Masai Mara National Reserve is, with its immense savannah plains and its river to cross, the ideal place to observe and photograph the transhumance of zebras and wildebeest. 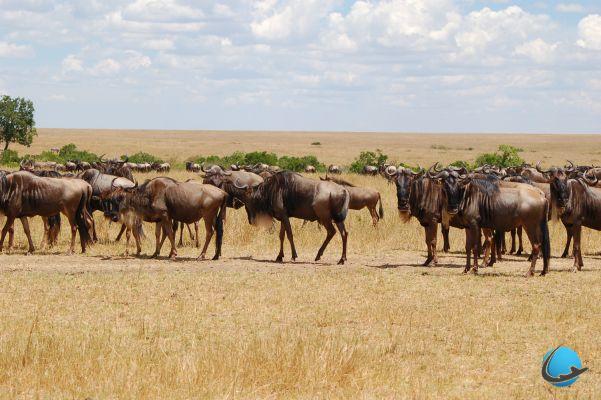 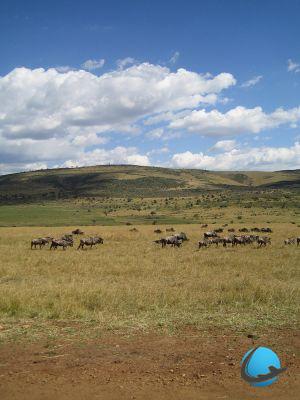 Portrait of a tribal man Maasaï

The Maasai are a tribe of herders and hunters living in Kenya and Tanzania. Their ancestral culture is rich and complex. They are particularly known for their sartorial pageantry and body modifications. We notice in this portrait the absence of two teeth voluntarily withdrawn during childhood. In addition, the color red is emblematic of the Maasai who wear it in jewelry, clothing and hair. 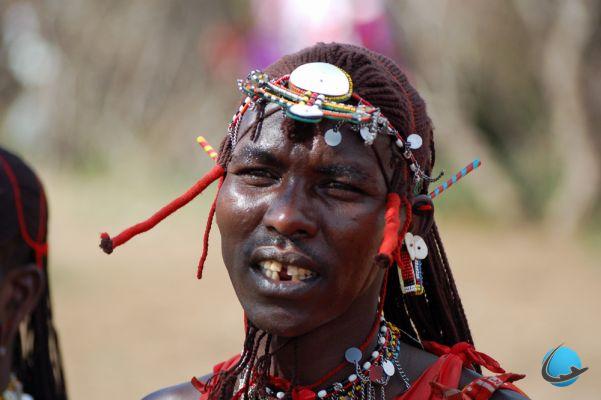 The most famous Maasai ritual dance: one after another, the men challenge each other by trying to jump as high as possible, accompanied by songs. 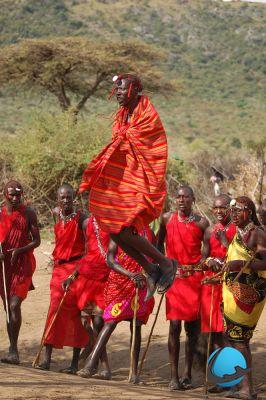 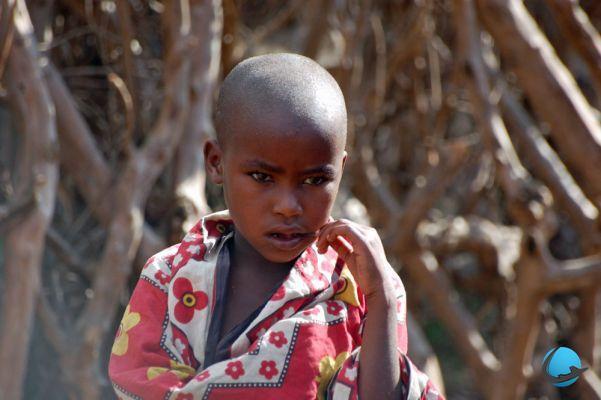 Amboseli Park is one of the most visited in Kenya. 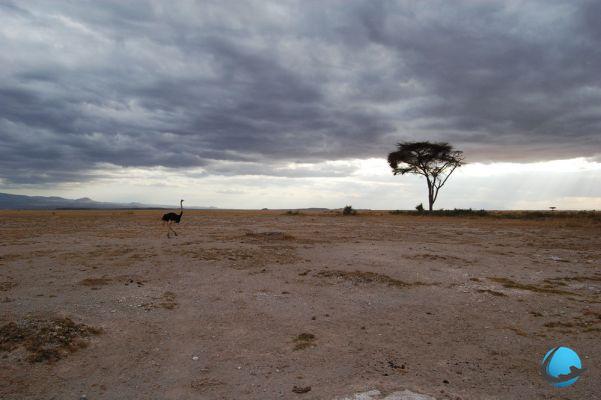 The summit of Kilimanjaro

Amboseli Park is renowned among photography enthusiasts for the possibility it offers to take pictures of savannah animals against the backdrop of Kilimanjaro at the snow-capped summit ... 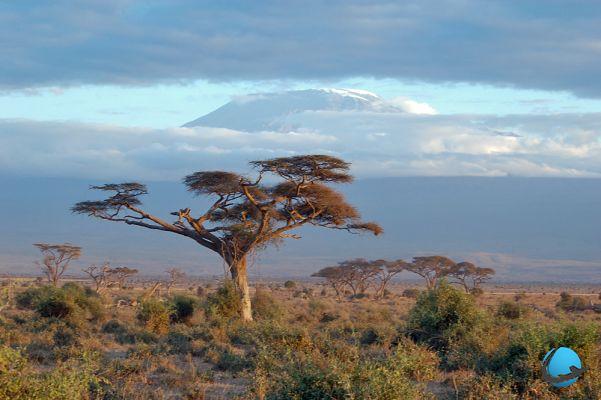 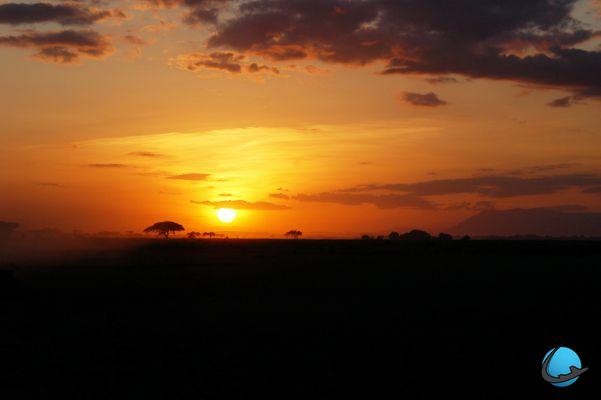 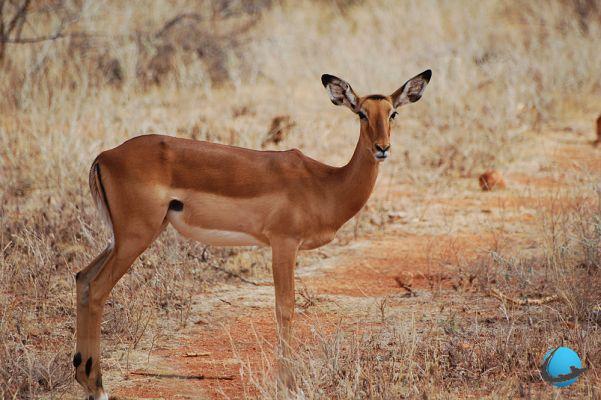 Portrait of a baboon. 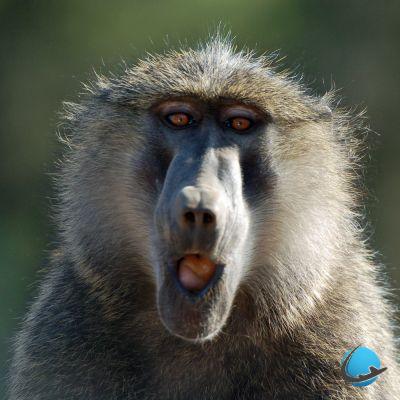 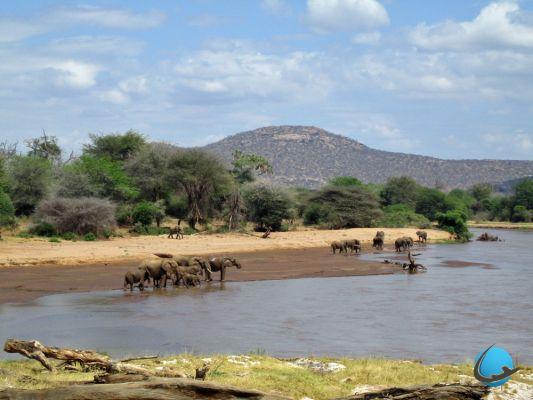 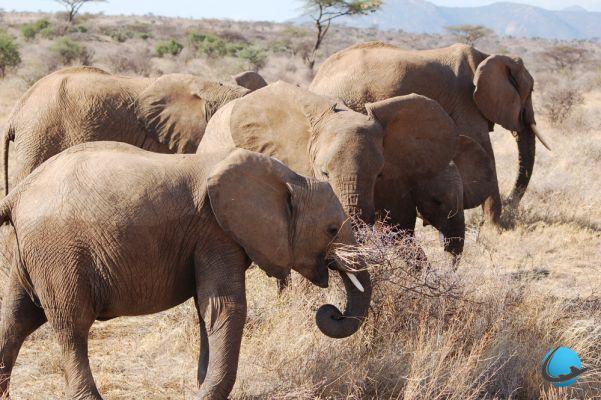 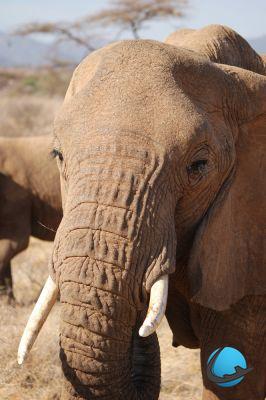 Crocodile taunted by a small monkey. 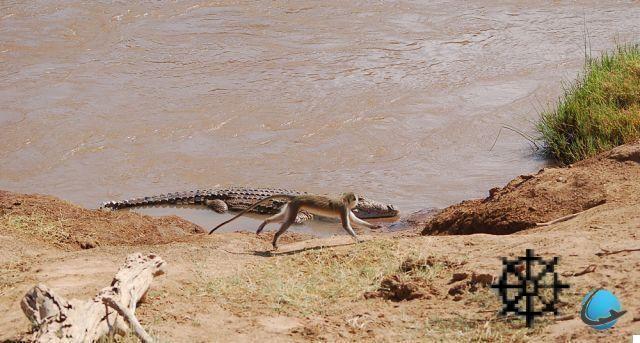 Antelope-giraffe eating the leaves of a shrub in the savannah. 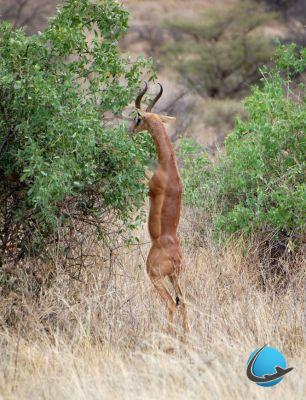 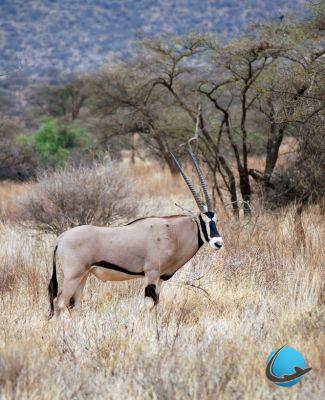 Typical landscape of the savannah in Kenya. 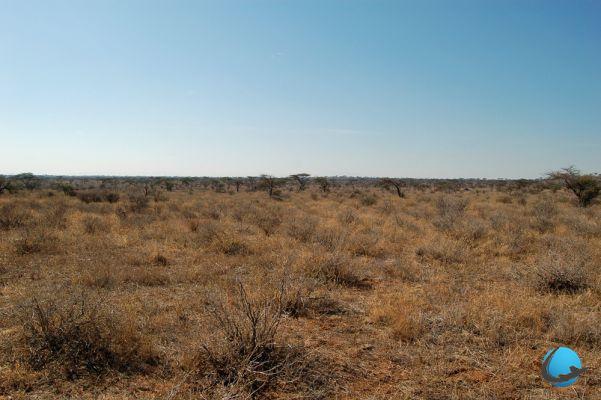 Have these few photos of Kenya finally convinced you to leave? Discover without further delay all our other articles and advice on the African continent.

Photography at the heart of your trip ❯

add a comment of Photo safari in Kenya in 30 shots