Climate in Changchun: when to go 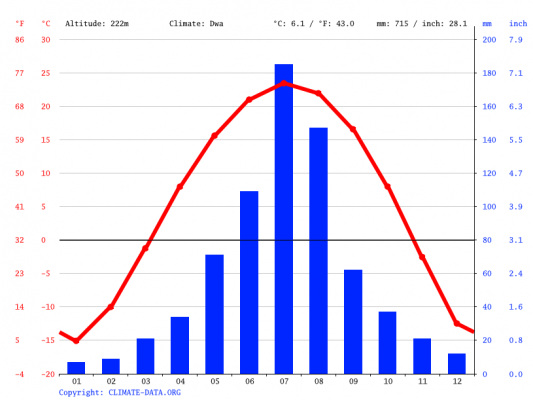 Here below, the main values ​​of the climatic averages over the whole year in Changchun:

These weather stats were generated from information provided by the CHANGCHUN weather station. This station is located in China, 9 km from Changchun and is located at an altitude of 238 meters.

The best time to go (or the one to avoid)

Here is some additional information that should allow you to choose the best time to go, or the worst months.


Which are the hottest months in Changchun?

Which are the driest months in Changchun?

These cities near Changchun can have quite similar weather:
Xinglongshan (à 14 km de Changchun), …

Climate in Xinyang: when to go ❯

Climate in Tianpeng: when to go

Climate in Jixi: when to go

Weather in Wuhan: when to go

Climate in Anda: when to go

Climate in Heyuan: when to go

add a comment of Climate in Changchun: when to go