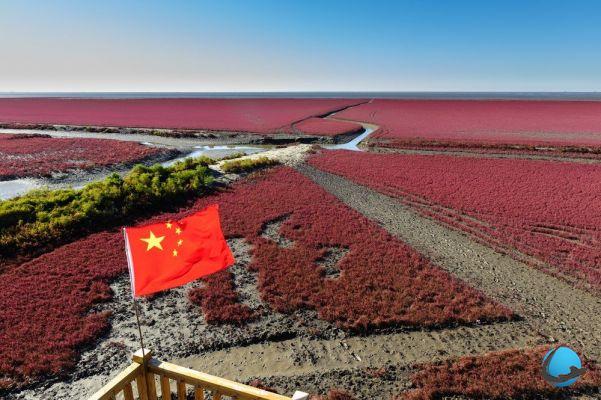 Where is this beach located?

On the edge of the Liaohe River Delta, Panjin Red Beach is located in Liaoning, a province in northeast China. If some like to remind people that the Middle Empire is not a champion of the environment, this site will silence the bad tongues.

Since the end of the 1980s, the State has protected the site, populated by several hundred animal species, by limiting tourism. And the curious can only visit part of the beach.

Panjin Beach is surprising in more than one way. Not only does it not offer any strip of sand, but it is also lined with a very special seaweed. It is the latter which gives the place all its originality. The sueda grows in April and shows a green color before turning burgundy red.

See you in the fall, between mid-September and mid-October, to attend the spectacle of nature. The plus: several hundred species of birds and nearly 400 species of wild animals have found refuge on this beach, some of which are endangered, such as Chinese cranes.

The site, which became a nature reserve thanks to its peculiarity in 1988, can be reached from Shenyang, the capital of Liaoning province, a little over 2 hours away. The nearest town is Yingkou.

The path is accessible thanks to stilts ingeniously installed to cover the various corners of the beach. Travelers can thus wander over the marshy area without difficulty thanks to a wooden path. You would have understood it, it is not a beach for swimming. It is prescribed for the pleasure of the eyes and that of the objective of the photographers.

A luxury hotel on the Great Wall of China

Add a comment from Panjin: the astonishing red beach “made in China”